This bird sighting made me wonder how December managed to sneak up on me again.

As Dr. Suess put it:

How did it get so late so soon?

It's night before it's afternoon.

December is here before it's June.

My goodness how the time has flewn.

How did it get so late so soon?

Posted by Julie Feinstein at 8:55 AM No comments:

It's also called an oil beetle. They are famous for producing a defensive yellow oil from their joints when threatened. The oil contains cantharadin, which causes blistering on human skin.

It's also famous having a first larval stage that is radically different from its subsequent grub style larval stages. It's called a triangulan. It's tiny, kind of looks like a silverfish, and has three claws on each of its legs from which it gets the name. It's built to travel to a food source. It's only job is to hitchhike on a bee.

Each species of Meloe beetle preys on a specific kind of ground-dwelling solitary bee. The kind of bee that makes a little nest in the ground, provisions it with pollen, and leaves eggs there to eat and grow. If the blister beetles have their way, those well planned bee babies either end up sharing their food supply or being eaten.

Meloe triangulans can work together to do something remarkable to get to those bees. They aggregate on a plant and produce chemicals that mimic female bee pheremones. A unwitting amorous male bee attracted to the scent ends up at a ball of tiny insects that latch onto him. When he finds a real female bee to mate with some of the triagulans are transferred to her and get taken back to her nest where they drop off and start pillaging.

What an amazing product of insect evolution crossed my path that day!

Posted by Julie Feinstein at 2:37 PM No comments:

With the last red berries and the first white snows.

And ice in the bucket and frost on the gate.

The fires burn and the kettles sing.

The earth sinks to rest until next spring. 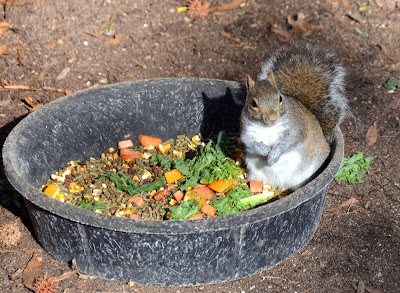 Posted by Julie Feinstein at 11:23 AM No comments:

Posted by Julie Feinstein at 6:56 AM No comments:

Posted by Julie Feinstein at 1:44 PM No comments:

the bare brush of

upon its battered hummock--- 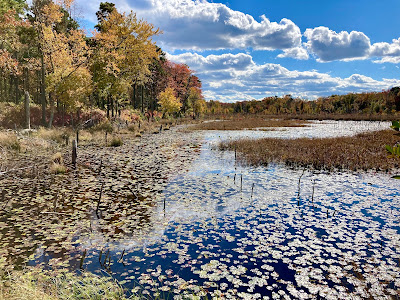 Posted by Julie Feinstein at 9:55 AM 2 comments: