Sleep the sleep that knows not breaking,
Dream of battled fields no more.
-- Sir Walter Scott

I will be back to blogging about urban wildlife next  Sunday.
Posted by Julie Feinstein at 11:28 AM No comments:

I had a picnic lunch in Brooklyn Bridge Park this afternoon. House sparrows, Passer domesticus, were watching and hoping for crumbs. A female sparrow had just picked up a tidbit when suddenly another, apparently one of her chicks, rushed over and assumed a begging position -- crouching, mewing, fluttering its wings, and gaping its beak. What parent could resist that? The bird with the crumb handed it over. Summer is still a month away and the baby sparrows are already as big as adults and learning to pick up a free lunch in the park.


Posted by Julie Feinstein at 3:50 PM No comments: 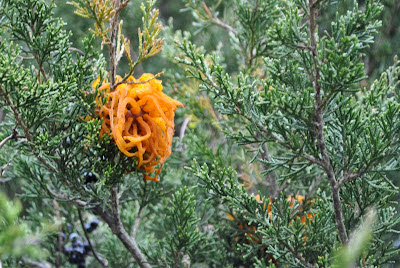 The bizarre looking orange growths in these photos are reproductive structures of the cedar apple rust fungus. I took these pictures while I was walking along a road near Hammonton, New Jersey, in a light spring rain.

They are usually called galls. They don't always look like this; like Gremlins, they change when wet. 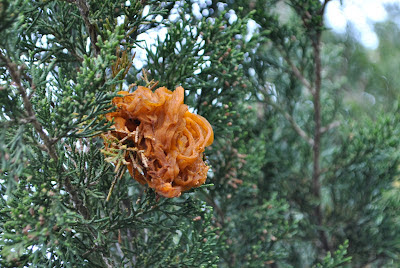 The spores germinate and infect the juniper tree (confusingly called red cedar). Galls grow on the tree in the following spring. First-year galls are pitted brown balls. In the second spring, the galls swell when they get wet. Gelatinous orange tendrils grow from them, quickly like mushrooms, pushing out of the surface pits. When it stops raining, the tendrils dry out and shrink into brown threads. When the galls get wet again, they swell and grow more. The gall eventually becomes a glob of two-inch long tendrils about the size overall of a small orange. It releases spores during dry periods for a few weeks.

Wind carries the spores away. If they fall on apple leaves, they can germinate and infect the tree. Pale yellow spots appear on infected apple leaves. These "rust spots" mature by summer and eventually open to release spores that are carried by the wind to junipers. The cycle repeats. 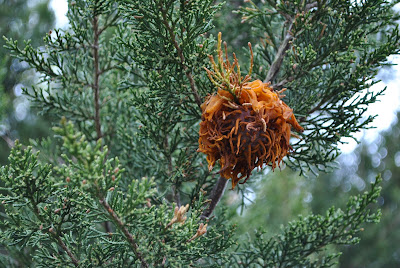 Posted by Julie Feinstein at 5:15 PM No comments: 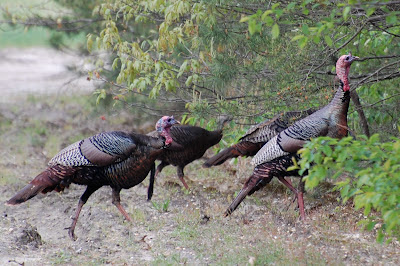 As unlikely as it may now seem to residents of New Jersey, there were no wild turkeys in that state from the mid-1800s until the mid-1900s. The historically abundant birds were extirpated (locally extinct).  Now there are over 20,000 in New Jersey and they seem to be everywhere.

In the 1950s some colonization by wild turkeys from Pennsylvania may have occurred. In 1977 the wildlife division of the New Jersey Department of Environmental Protection released 22 wild turkeys. The birds did well enough that in 1979, game managers were able to trap some of the flock and release them in different locations. The reintroduction program worked splendidly. 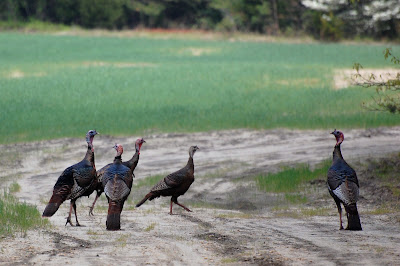 I just spent a week in southern New Jersey in the pinelands area around the Wharton Tract. I saw flocks of wild turkeys everywhere! They were by the sides of roads, in backyards, in the woods, in empty lots, and walking among the spring crops.

And wild turkeys are not just in the remote parts of the state; they're strutting in Newark's North Ward, Cherry Hill, Tenafly, Maple Shade, and more New Jersey towns and cities than there is room to list. A flock of about 200 birds was seen in Deptford last winter.

Closer to my New York City home, a famous female wild turkey has lived for a few years in Battery Park at the lower tip of Manhattan. Our urban turkey is named Zelda after F. Scott Fitzgerald's wife who is said to have once wandered from her home and been found, like the turkey, far from her normal habitat. 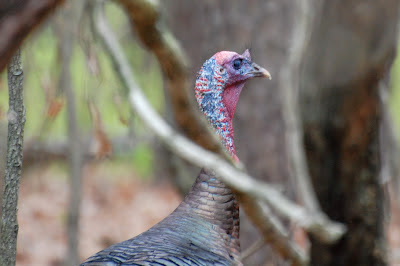 Posted by Julie Feinstein at 5:07 PM No comments: