Swan of a Different Color

Here are some awful swan jokes suited to the holiday:

Where do swans invest their cash?
In the stork market!

Why don't swans grow up?
Because they grow down!

Do you know why swans stay home on winter days?
Fowl weather!

What do swans watch on TV?
Duck-umentaries!

A skunk, a herd of mostly female deer, and a swan go out to eat. When it comes time to pay the skunk only has a scent, the deer just have one buck. They end up putting it on the swan's bill!

Posted by Julie Feinstein at 2:13 PM No comments:

Flowers and A Turkey 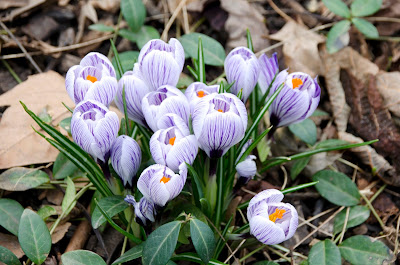 Posted by Julie Feinstein at 3:25 PM No comments:

"The flowers of late winter and early spring occupy places in our hearts well out of proportion to their size."
Gertrude S. Wister


Posted by Julie Feinstein at 2:55 PM No comments:


Posted by Julie Feinstein at 3:49 PM No comments:

A Duck Walks Into A Bar 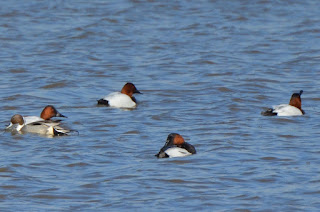 Here are some canvasback ducks, Aythya valisineria,  with a a photo-bombing northern pintail, Anas acuta, star of last week's blog, heading left near the margin. These were at Forsythe last week, but I've been seeing canvasbacks in the Delaware River lately, too.

The ducks above are wild ducks of course, but they reminded me of this story that features their barnyard cousins.
It's by Garrison Keillor, from Truckstop and Other Lake Wobegon Stories:

“He takes a kitchen chair and sits in the yard and all the ducks come around. He holds up the cheese curls in one hand and caramel popcorn in the other and his audience looks up and he tells them a joke. He says: So one day a duck come into this bar and ordered a whiskey and a bump and the bartender was pretty surprised, he says, "You know we don't get many of you ducks in here." The duck says, "At these prices I'm not surprised.* And he tosses out the popcorn and they laugh. 'Wak wak wak wak wak. I was shot in the leg in the war.' Have a scar? 'No thanks, I don't smoke.”

Posted by Julie Feinstein at 2:34 PM No comments: