A Walk in Maine

One day last week I took a walk in Maine -- on the nearly mile long breakwater to the lighthouse in Rockland Harbor.

Posted by Julie Feinstein at 5:38 PM No comments:

The autumn equinox occurred at 4:44 this afternoon, EDT, giving us 12 hours of daylight and 12 of dark as the sun crossed the celestial equator. Summer ended. Autumn began. Here are pictures of some of the last of summer's butterflies (and one lovely moth) taken in my Brooklyn neighborhood during the last few weeks.


A haiku written by the Japanese poet Kobayashi Issa in 1814:


are you aware
that autumn has dawned?
meadow butterfly

Herring gulls take four years to acquire their adult plumage, molting into different sets of feathers, each with a distinctive appearance, each summer and winter. The bird pictured above was born this year and is in its first winter plumage now in September: mottled brown all over, patterned wings, slightly paler head with a dark eye, a mostly black bill, and pink legs.

Walt Whitman, the poet, also stopped to watch gulls. He might have been thinking about herring gulls when he wrote this in his poem Crossing Brooklyn Ferry:


... seagulls -- I saw them high in the air, floating with motionless wings, oscillating their bodies, I saw how the glistening yellow lit up parts of their bodies, left the rest in shadow, I saw the slow-wheeling circles, and the gradual edging toward the south.
Posted by Julie Feinstein at 5:00 PM No comments:

Flesh fly larvae (maggots) feed on corpses and carrion, and sometimes on the wounds of mammals, hence their common name. They are also found on excrement and decaying organic matter. Adults feed on sugary liquids like nectar, sap, and fruit juice. But sometimes they just sit in the sun casting tiny shadows.

The one I photographed, above, was grooming itself on a yellow sign. It reminded me of this haiku from the Japanese poet, Kobayashi Issa (1763-1828):

Posted by Julie Feinstein at 4:48 PM No comments: 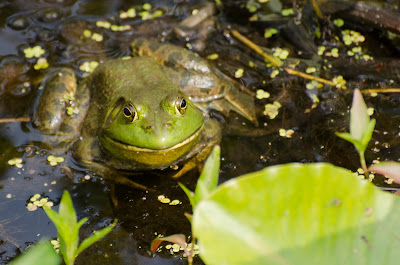 Great Swamp National Wildlife Refuge is only 25 miles from New York City in Vernon, New Jersey. It's a great place for a day of strolling and wildlife spotting. There are duck blinds, roads and trails, wildflower fields, and boardwalks over marshes.

Wood ducks and eastern bluebirds are some of the wildlife rock stars that breed in the refuge. On a recent walk I saw a mother wood duck steer her flock of seven teenage ducklings deeper into the brush and away from my prying eyes.

If you pause on the boardwalks and look carefully at the marsh vegetation, frogs, birds, snakes, and dragonflies will come into focus.