I saw this pair of barn swallows resting in the water gardens in Brooklyn Bridge Park this morning, just after dawn.

They deserve a rest! They spent the winter in Central or South America, returning in spring with the insects that they feed on. One banding record shows a barn swallow traveling between Panama and New York in about six weeks, averaging 55 miles a day.

And once they get here they chase flying insects all day long, catching them in the air. They fly like aerial acrobats, making sharp turns and outwitting even the wiliest insect fliers. I rarely see barn swallows sit still.

Barn swallows come back to their summer homes at about the same time every year and individuals are very likely to return to the same places. This endeared them long ago to sailors who also hoped to return safely from long journeys. The swallow became a favorite sailor's tattoo, traditionally of two swallows facing each other on the chest or back. One symbolized 5000 miles of sea travel. The second was added after 10,000 miles at sea.

For Memorial Day we wish all sailors the good luck of barn swallows and many safe returns.
Posted by Julie Feinstein at 6:49 AM No comments:

Newts love rainy weather. And why not? They are amphibians -- born in water and eventually returning to it after a mid-life sojourn on land. Even in their terrestrial stage they like to stay moist. I bet they've been having a great time this past week!

Red-spotted newts like ponds and little lakes, ditches, and marshes in woodlands and parks. They are native North Americans, found from the Canadian Maritime Provinces south to Florida and west to the Great Lakes and Texas. The red-spotted newt, Notophthalmus viridescens, is also called eastern newt and eastern spotted newt.

The red-spotted newt's terrestrial stage called a "red eft" is pictured above. Its color is a warning to would-be predators that efts are not good to eat; their skin contains toxins. Efts can spend a few years wandering on land before returning to ponds to become greenish adults.

The adults mate in late winter and early spring; it is probably all over by now. A female is attracted to a male's spots -- black-bordered red spots on their backs, big black polka dots on their little yellow bellies. The male also produces pheromones that he wafts her way with his broad tail.

Red-spotted newt couples mate in water. He hugs her upper body, wrapping his hind legs around her just behind her forelegs. To get ready for mating season, the male grows black spiky structures on inner thighs and toe tips for better gripping and grasping. The male's tail also gets a big crest then too, possibly for better wafting of pheromones. While hugging, the couple rubs heads until the male produces a package of sperm, which he politely deposits on the bottom of the pond. The female picks it up with her genitalia and uses it to fertilize her eggs. Then she goes around the pond attaching fertilized eggs to submerged plants. The eggs hatch through spring and summer into little larvae with gills; in late summer they transform into efts and leave the pond.

Red-spotted newts look like lizards but have soft skin instead of scales. They are a kind of salamander. The funny thing about salamanders is that they all spend much of their lives in water, yet they are symbols of fire. In ancient times, they were thought to be unhurt by flames. The word salamander comes from Greek for fire lizard. In medieval times salamanders were even thought to originate from flames, and practitioners of the occult saw them as the embodiment of elemental fire (hence their inclusion in magical potions).
Posted by Julie Feinstein at 3:45 PM No comments:

Last summer I wrote a blog about the wasps that gather on a patch of fennel near my home. Click here to read it.

One of the most interesting wasps was a mud-dauber in the family Eumenes. The mud wasps build elegant little pots out of mud. Click here to see a You-tube video of a mud pot being made -- it's cool.

I am revisiting this because I recently found some empty pots on the wall of a building in southern New Jersey, near Atlantic City. Just two empty pots and no sign of the builder. 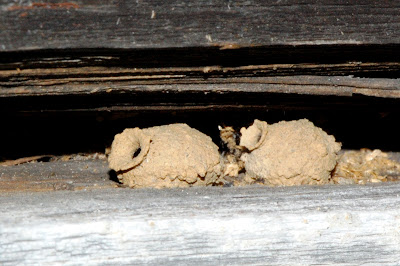 What I didn't mention in last summer's blog is why the wasps make mud pots. The pots are nurseries. Tiny somewhat gruesome little nurseries. A mother wasp captures an unfortunate insect -- a caterpillar, cricket, or spider depending on what species of wasp is shopping. She deposits the paralyzed thing in a fresh mud pot, lays an egg on it, and seals it. When the wasp egg hatches, a fresh meal is waiting and will serve throughout the wasp's early development. Talk about your inherently cruel nature!


It makes me think of Tennyson, of  "nature, red in tooth and claw..."
From In Memoriam A.H.H., by Alfred Tennyson

Are God and Nature then at strife,
That Nature lends such evil dreams?
So careful of the type she seems,
So careless of the single life;

That I, considering everywhere
Her secret meaning in her deeds,
And finding that of fifty seeds
She often brings but one to bear

There is more information about urban and suburban birds in my book, Field Guide to Urban Wildlife, published by Stackpole Books. It's available now from Amazon.com, Barneandnoble.com, and Stackpolebooks.com -- links are on the right of the page.
Posted by Julie Feinstein at 1:18 PM 2 comments: 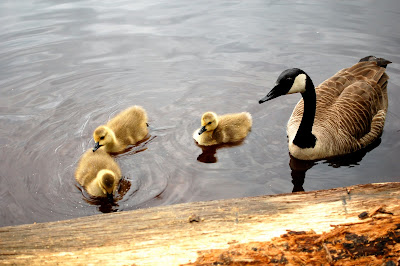 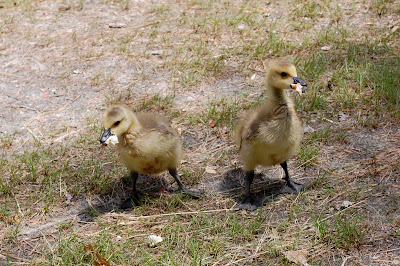 Posted by Julie Feinstein at 1:28 PM No comments:

The laughing gulls are back! 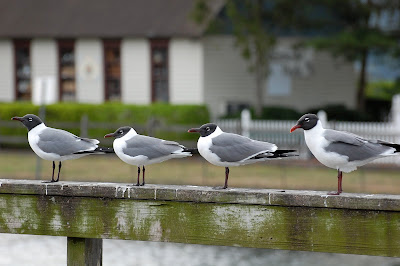 
Click here to listen to laughing gulls.
The call is loud and it is easy to imagine that the birds are laughing. In the northeastern United States it is a summer sound; the birds migrate south for the winter. They return like clockwork to the New York City area in April and will stay until autumn.
Laughing gulls are about 16 inches long with a wingspan of about three feet. Males and females look alike: white below, gray backs, white-spotted black wingtips. Adults in breeding season have red bills, black heads, and small white crescents above and below the eyes.
The birds usually stay close to the ocean, along the Atlantic and Gulf coasts. They eat crabs and shrimp, fish, insects, berries, and trash. They often follow ferries and trawlers, hovering over the wake. They have adapted to foraging at urban landfills, parking lots, and trash dumpsters. They are famous for stealing food from other birds.
Laughing gulls habitually perch close to tables at those outdoor seafood places on the Jersey shore, watching carefully and hoping for handouts. They are agile fliers and can easily catch food tossed into the air. But if you are not vigilant, a bold laughing gull may hop onto the table and fly away with one of your fried clams. 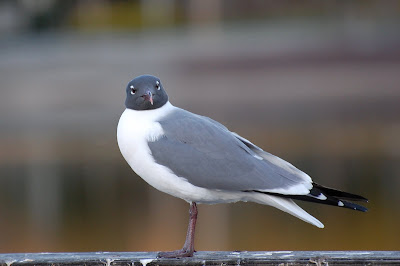 Posted by Julie Feinstein at 6:33 AM No comments: