A handful of crushed fennel leaves smells deliciously of celery and licorice.
There is a little patch of fennel among the flowers growing on the extension of Middagh Street that passes over the Brooklyn-Queens Expressway near my home. The plant is tall with pretty feather-like foliage. Its tiny yellow flowers are borne in little bouquets that are technically called compound umbels, like the flowers of parsley and carrots.  Fennel is one of the main flavors in the cordial Absinthe, and it is used in herbal medicine too. The seeds are used as a spice, and some of us eat fennel bulbs and leaves as a vegetable.
But we are not the only ones who like fennel. Wasps love it!
On a sunny day a seemingly endless parade of exotic looking insects visits fennel blossoms, each more elegant that the last: thread-waisted wasps, potter wasps, mud dauber wasps, a good compliment of honeybees and bumble bees, and lots of fancy flies come in for a tasty sip of fennel nectar.
Here are photos of a few recent visitors. 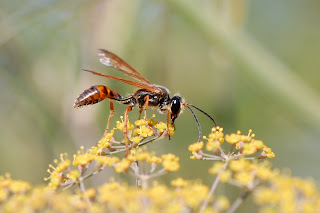 They got the common name "grass-carrying" because they incorporate grass into their nests. 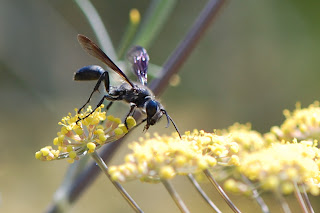 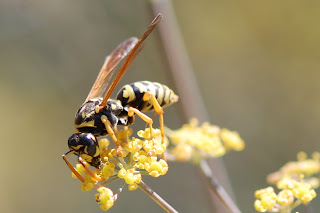 The European paper wasp is a relative new comer to the United States, introduced from Europe and first recorded in the northeastern United States in the 1980s. It has already gained a bad reputation as a cranky wasp that becomes aggressive toward humans with very little provocation. 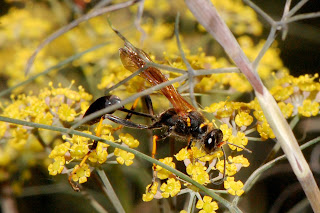 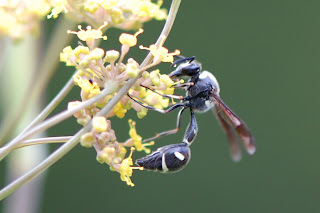 Eumenes fraternus -- a potter wasp.
Visit this link to see how the potter wasp uses that fancy tail end to build a pot-shaped nest out of mud:
http://www.youtube.com/watch?v=dYMN_FXoXFk
There is more information about urban insects in my book,  Field Guide to Urban Wildlife, which will be published by Stackpole Books in spring 2011.
Posted by Julie Feinstein at 5:40 PM