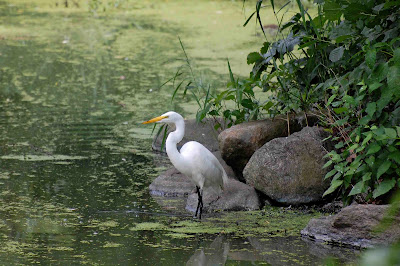 This bird has lots of names. It’s called the common egret, large egret, American egret, and white egret. And it's no surprise that many people have noticed the elegant and beautiful bird; it is more than three feet tall and has a wingspan over four feet. 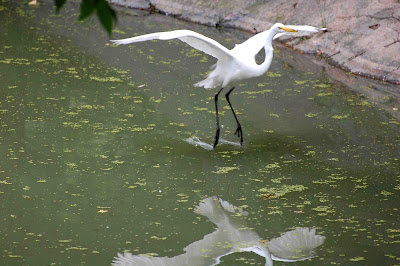 The great egret is white with a yellow beak and black legs and feet – a combination of colors that distinguishes it from other herons and egrets you may encounter. It flies with its neck folded back, flapping deeply and slowly. 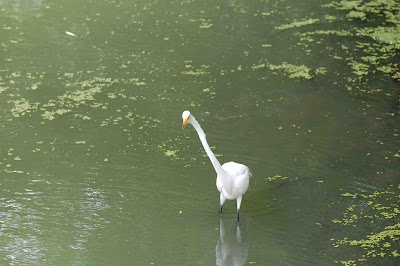 It is often seen wading in shallow water or in mud, stalking its prey – frogs, snails, fish, insects, crayfish, and similar small things. This one often hunts in New York City's Central Park at the narrow end of The Lake just north of the Bank Rock Bridge.
The great egret is found throughout the southern states and in estuaries and wetlands on both coasts during some part of the year, breeding mainly in the east but with exceptions. Some pairs breed in isolated spots and others in colonies. They build big nesting platforms of sticks, usually in trees, but also on the ground or in shrubs. Typically they lay three pale blue-green eggs. Males and females look the same. In breeding season they develop long plumes on their backs, which they erect and spread like big lacy fans.

The beauty of their plumes caused big trouble for them in the 19th and early 20th century. They were very popular decorations for ladies' hats. Wild bird hunting was unregulated then. Millions of egrets and other birds were slaughtered for their plumes and feathers. Common egrets were hunted to the edge of extinction.
Public outcry saved them just in time and led to legislation that protects wild birds to this day. The Audubon Society was formed around then -- they incorporated in 1905; they led the cause, and later adopted the great egret as their symbol.

The great egret population has recovered and is doing well; its range in the United States is expanding.
Our taste in hat decorations has improved too. 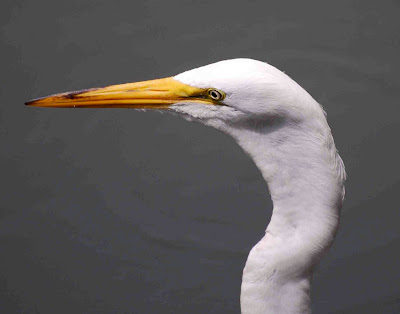 There is more information about urban birds in my book,  Field Guide to Urban Wildlife, which will be published by Stackpole Books in spring 2011.
Posted by Julie Feinstein at 4:55 PM