I saw this big snapping turtle sunning himself on the shore of  The Reservoir in Central Park on one of the first warm sunny days of the year last week.

The snapping turtle is New York's official state reptile. Big ones can grow to around 18 inches long and weigh about 35 pounds. Wild snappers like this one are estimated to live for about 30 years.

To take a dust bath, scratch a depression with the feet. Wiggle the belly down into it. Ruffle the feathers. Shake and flap furiously to fling dust in the air. Spread the wings and get dust all over them. Shake the dust through the feathers and down to the skin. Repeat. Repeat. Repeat. Then shake the dust off and preen until spiffy. Voila! Many kinds of birds take dust baths; it helps control parasites and absorbs excess oil. 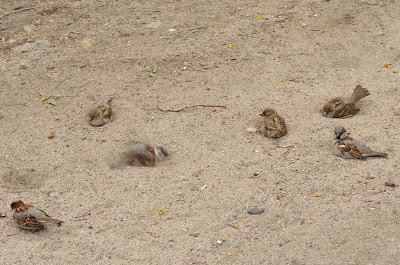 Sun bathing, too, helps keep the feather parasites down. To sun bathe, a bird spreads or droops the wings, ruffles feathers, and assumes various postures that expose different areas of its body to the sun. When a parasite moves to get away from the heat and light, the bird snacks it down.


Posted by Julie Feinstein at 6:59 PM No comments:

European house sparrows are so common in New York City that they are easy to overlook.

But I saw a special one in Cadman Plaza Park in Brooklyn Heights last weekend -- a female with patches of white feathers on her back, sides, and tail. She has a genetic condition called leucism, which prevents the normal deposition of pigment in some of her feathers. (Another form of the condition can cause birds to be pale all over.)

Leucistic birds are pretty rare. The Feeder Watch Project run by the Cornell Lab of Ornithology, for instance, reported fewer than 1000 leucistic birds among five and a half million observed during one year at feeders across the US and Canada. That's less than one bird in 5500, or about 0.02%.

I hope this one stays in my neighborhood for a while. I'll report back if I see her again. 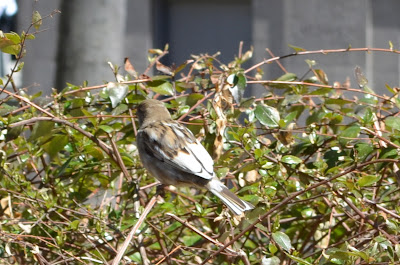 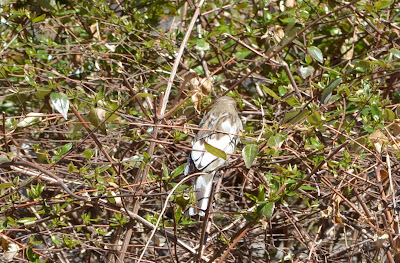