They paddle with staccato feet
In powder-pools of sunlight...
from Pigeons by Richard Kell

In the 1950s a scientist named Harvey Fisher was using pigeons to study landing forces. He noticed that the birds did not always land on both feet simultaneously. Sometimes they extended one foot or the other to absorb the force of the landing. This inspired Fisher to watch his flock of 11 experimental pigeons land 7,259 times.

He found that seven of them were right-footed, three so strongly so that they landed on the right foot over 90% of the time. Three of the birds were left-footed. One bird had no preference -- it was apparently ambipedal.

He published his observations in 1957 in  the ornithological journal, The Wilson Bulletin. You can read the original paper by clicking here.

I'm keeping a landing log of a few distinctive pigeons in my neighborhood. I'll let you know.

Sparrows in the Snow


Ever wonder how birds survive the cold winter weather? There is no question that it is hard for them, but they have some adaptations that get them through it.

Their feathers insulate them against the cold and the oils that they spread on them while preening add waterproofing. But their feet are bare ! you are saying. Like in a heat-exchange system, their blood passes through side-by-side capillaries on the way to and from the legs; incoming blood is warmed and outgoing blood is cooled. Less heat is lost that way. And they sometimes stand on one foot with the other tucked up in the feathers.

They puff up their feathers, which traps some insulating air. They can huddle together. They can sit in the sun. They find wind-sheltered places like the broad-leaved evergreen bush near my porch fence in the picture below. They sometimes perch on warm human structures, like chimneys and outdoor lights. I knew a red-tailed hawk that regularly slept on the windowsill of an old building in Manhattan -- heat leaked from the rickety windows and made it a good place to spend a cold night.

The sparrows outside my window remind me of a poem called Winter Birds, by Andrew Downing. Here is part of it:


Warm sheltered corners the cattle have chosen, Shivers the pine in its evergreen leaves; Pools by the roadside in wrinkles are frozen-- Bayonet icicles hang from the eaves. Five English sparrows, defying the weather, There in the pathway a conference hold; Ho! merry midgets in doublets of feathers! Why do you rally out there in the cold?
Little you care for the riot and rattle-- Little you heed--let the mercury fall! Brave little fighters, go on with your battle-- Here is a friend who will welcome you all! Fly to my window--I'll feed every comer-- Hail to the comrades that constancy show Loving and loyal, in winter and summer-- With us, alike, in the heat and the snow! 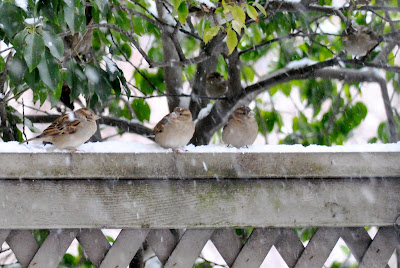 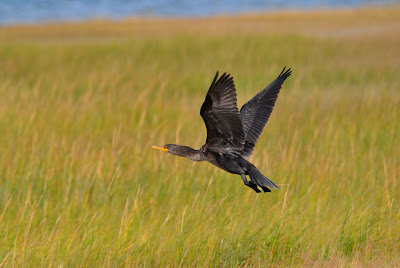 "That bony potbellied arrow, wing-pumping along implacably, with a ramrod's rigid adherence, airborne, to the horizontal, discloses talents one would never have guessed at."
from The Cormorant in Its Element by Amy Clampitt.
Double-crested cormorants have seen hard times. In the 1960s they were threatened across the United States by the use of the pesticide DDT, along with Peregrine Falcons and Bald Eagles. Thanks to a federal ban on DDT and the passage of the Clean Water Act, cormorants have recovered. They showed up in New York Harbor in 1985. Now I see them often in the East River. There are usually a few loafing on the pilings at the southern end of the waterfront promenade on Pier One in Brooklyn Bridge Park.
Double-crested cormorants are large, slender, short-tailed, birds about 30 inches long. Their necks are kinked. Their eyes are blue. Their bills have a hook at the tip. They have an area of bare bright orange skin on the face and throat. Adults are black with a greenish sheen. Immature birds are gray on the neck and breast.
They dive underwater to chase fish, swimming after them and grabbing them with their bills without spearing. Some of the cormorant's feathers are specially structured to decrease buoyancy so they can dive efficiently. The special feathers get wet during dives; cormorants typically sit in the sun with wings spread to dry them after diving. Just the outer feathers get wet, so the cormorant is still well insulated by a layer of air next to its skin and able to dive in cold water. 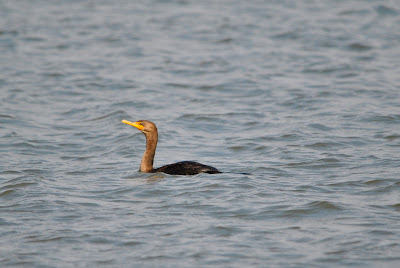 Cormorants swim low in the water and sometimes all we see of one is its head and neck. They dive from the surface, propelling themselves with their feet. They can dive to about 25 feet and stay under for more than a minute. They eat smaller fish while underwater, but sometimes bring big ones to the surface. You may see them slap a fish on the water surface, and then toss it in the air to swallow head first.
Oh, and don't get too close. The double-crested cormorant is famous for its vomit defense. If you threaten it, it may throw up on you.
Posted by Julie Feinstein at 9:11 PM 4 comments:

I saw a bright male American kestrel land on a utility pole yesterday in Brooklyn Bridge Park. The American kestrel is the smallest falcon in North America. It is also the most numerous, most colorful, and most widespread. Although it is only the size of a robin, it is as deadly to its prey as any falcon– it swoops from the sky to catch and kill live insects, rodents, and small birds.
The kestrel in the photos is a male. He is between eight and ten inches long. Female kestrels are slightly larger. Both genders have two vertical black stripes on white faces, black talons, dark eyes, and reddish brown backs and upper tail surfaces. Males have bluish grey wings.

As I watched, the kestrel hunted using a sit-and-wait strategy: it perched high, bobbing and turning its head to scan the ground below for prey. Had it found something worthwhile, it would have swooped down to grab it with sharp talons. Kestrels are fast, graceful, and deadly. They sometimes also hunt by hovering stationary in the air, looking down. And they fly distinctively -- pointing their wings down and back with each stroke as if rowing, interspersed with periods of fast stiff-winged glides, until soundlessly falling upon prey.
It is not unusual to see a kestrel flying over a New York City street with a mouse dangling from its talons. Kestrels can find lots to eat here, and plenty of places to live. They are secondary cavity-nesters; they build nests in cavities, but they do not excavate them. They use holes made by woodpeckers, naturally occurring holes in trees and cliffs, and spaces in buildings and other man-made structures.

American kestrels are in New York year round. They breed across the United States, Canada, and Mexico. In winter, the northern-most breeders migrate south and some that breed further south migrate as far as Central America.

I have seen kestrels flying down Broadway in Manhattan, sitting on windowsills of fancy apartment buildings, and perching on traffic lights at busy intersections. When I drive on the New Jersey Turnpike I see them perched on utility poles scanning for prey in the short grass on the shoulders of the highway. The one in the photos is the first I have seen in Brooklyn's new park. I hope is stays.


I wish everyone a year filled with fabulous urban wildlife sightings!
Posted by Julie Feinstein at 2:45 PM No comments: