It was a beautiful day in Brooklyn today with a cool breeze and strong sunlight. I walked all the way from Brooklyn Heights to Red Hook -- about three miles -- and back. Along the way, these two birds won my best birds of the day award for outstanding flashy iridescence.

Posted by Julie Feinstein at 6:43 PM No comments: 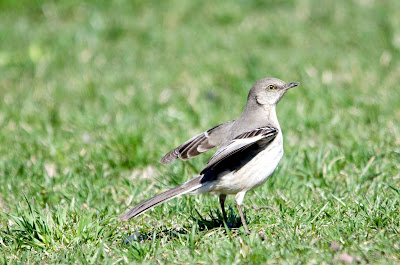 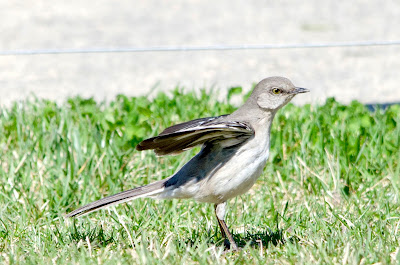 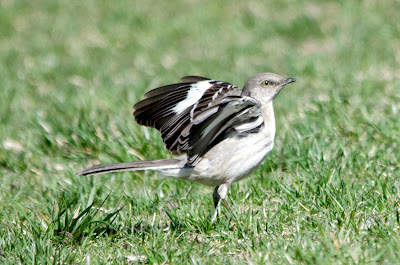 A northern mockingbird landed on the ground near me and performed this wing-flashing behavior for which mockingbirds are famous. The bird took a a couple of quick steps, stopped, and in a few jerky movements lifted and spread its wings, showing off its white wing patches. Then it took a few more steps and did it again, as it made showy progress across the lawn.

Wing-flashing in mockingbirds is usually explained as a foraging technique that startles insects into view. There are other birds that hunt insects by flashing their wings like this; it's called flush pursuit. But mockingbirds flash their wings at other times, too, not just while foraging. They do it when confronting predatory birds like owls, and they do it in territorial disputes with other mockingbirds, for instance.

In 1960, ornithologist Robert Selander suggested that mockingbirds flash their wings in situations that make them anxious, like when they are on the ground exposed to predators. He thought the wing-flash was a kind of ritualized intention to fly that evolved as a social signal and acquired the coincidental benefit of flushing insects. Selander speculated that individual birds learned to associate wing-flashing with foraging through the positive reinforcement of enhanced hunting success.

Read the original paper "On the Functions of Wing-flashing in Mockingbirds" by clicking here.
Posted by Julie Feinstein at 5:20 PM 8 comments:

The other day I was walking in Brooklyn when I heard urgent sounding calls of klee klee klee from above. Two kestrels were flying over the buildings, a male and a female. Male kestrels have slate blue wings with rusty backs and tails. Females have reddish brown wings, backs, and tails, with no blue. Both sexes are pale below and have vertical black bars on the sides of their pale faces.

The birds I saw were making a commotion, darting and calling -- and the male was carrying something. The female landed on an antennae on the roof of a Brooklyn brownstone. The male landed nearby. He had a small bird in his talons! Captured prey! In what I think was an incidence of courtship feeding and with lots of wing flapping, the male passed the prey to the female and then took a seat again while the female tore into her nuptial meal. Sorry I could not get closer for details with the camera I had with me, but you'll get the idea from below. Click on the photos to enlarge. 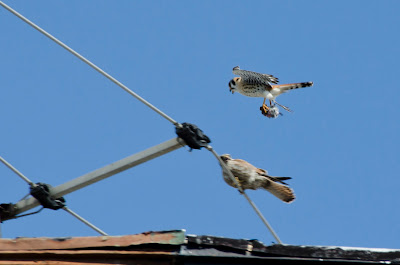 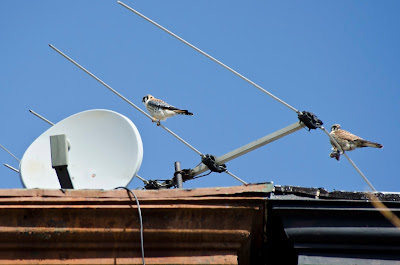 I was inspired by the occasional "rainbow" birds I see on Facebook -- all made pretty much the same way. Click here to see a famous one that went viral.  Although nature can be amazing, you can't believe everything you see on the Internet. Our standard blue jay is pretty impressive without computer generated enhancements.
Posted by Julie Feinstein at 4:22 PM No comments: