The first day of spring is one thing, and the first spring day is another. The difference between  them is sometimes as great as a month.
--  Henry VanDyke, 1899, in Fisherman's Luck.
On Saturday morning, officially the fifth day of spring, I was walking by the East River in Brooklyn Bridge Park wearing earmuffs, scarf, and gloves again, and I was freezing! The temperature was 32F, the wind from the bay was bitter, and the muskrat's pond was covered by a thin plate of ice.


A song sparrow perched conspicuously in a bare tree with his feathers puffed up against the cold. The wind ruffled his feathers but did not deter him. He was clearly ready for spring. For as long as I could stand the cold and watch, he looked around, threw his head back, opened his beak, and sang. Then he did it again. And again. Repeatedly announcing his claim on the territory and advertising his readiness to pair up with a nice lady sparrow.

The song started with three distinct notes and ended in a complex series of warbles and trills. They don't call these birds song sparrows for nothing; each has a repertoire of up to 20 different tunes and they improvise variations. They usually sing one a few times and then another. And they have dialects. Their songs vary over the song sparrow's wide geographic range, which includes most of North America. You may hear one sing a new song if you travel far from home.

Here are some of the birdwatcher mnemonics that have been made up to help identification by mimicking the cadence and syllable count of song sparrow songs:


Maids! Maids! Maids! Put on your tea kettle-ettle-ettle
Hip. Hip. Hip hurrah boys. Spring is here!
Madge. Madge. Madge. Pick beetles off -- the water's hot.
Click here to listen to a song sparrow singing.
Song sparrows are about 6 inches long,  streaked with dark brown, white underneath, with a brown stripe through the eye, and a brown cap with a pale stripe down the middle. They have a dark brown spot in the center of the breast.  The tail is rounded and relatively long as sparrow tails go. Males and females look alike. Song sparrow color varies a lot and can be anywhere from sandy pale to chocolaty brown. Thy eat seeds and fruits, supplemented with insects in season; they are often seen on the ground scratching leaves aside to turn up tasty treats.

They are found in almost any kind of habitat: pine forests, desert scrub, coastal marsh, suburban bird feeders, cities and roadsides. They are present year round in much of the United States, but many migrate south in the winter and north again to breed in Canada in summer.

And they seem able to find an exposed branch in any vacant lot in between from which to declare the imminence of spring. 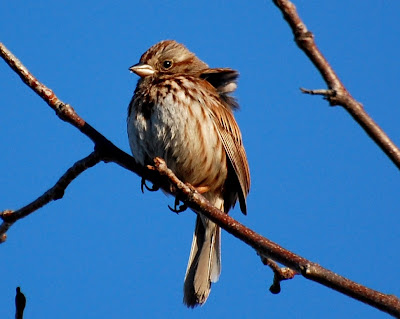 Posted by Julie Feinstein at 5:55 PM No comments:

Saturday was the last day of winter. It seems fitting that there were winter ducks in the East River -- some red-breasted mergansers and a pair of bufflehead ducks. The buffleheads were far from shore but their distinctive patterns make them easy to recognize from a distance.


When male and females of a species look different like this, they are called sexually dimorphic (di=two, morph=shape). Male and female buffleheads are about a foot long and both have small gray bills.

Buffleheads, Bucephela albeola,  spend the winter throughout the United States. They migrate north to breed. The pair pictured here will probably find a nice lake in Canada and raise a family there. Somewhat unexpectedly, they make their nests in trees. And, even stranger, they almost always make them in holes excavated by woodpeckers in previous nesting seasons.

Don't be surprised if a bufflehead you are watching disappears before your eyes. Buffleheads dive under water to find aquatic plants and insects, fish eggs, mollusks, and crustaceans. Whereas mallards and many other familiar ducks stay on the surface and tip over with their heads under water and their feet n the air, buffleheads go completely under the surface and can come up surprisingly far away.

People come up to me and whistle this song, wondering what kind of bird they heard. Rachel Maddow even recorded it on her Blackberry while walking in the woods last year and played it on her news show, seeking identification. It is that kind of sound. It stands out.

The next sentence links to a nice YouTube video of a white-throated sparrow singing; click it to hear the song. When you hear this outside, spring has arrived! 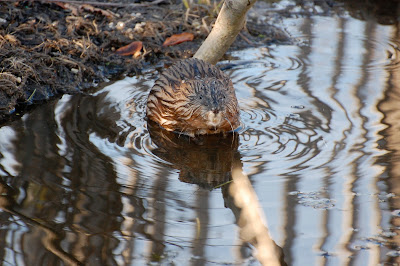