I saw this American snout butterfly drinking flower nectar in Brooklyn Bridge Park. Its "snout" is really elongated mouthparts. Along with its brown and gray colors, and its ability to sit very still upside down, the butterfly sometimes convincingly mimics a dangling dead leaf. Its snout looks remarkably like a leaf stalk when it's pressed up against a twig. The message to butterfly-eating birds: Nothing to see here but dry leaves! Move along!

Female snout butterflies lay their eggs on plants in the hackberry family, where the caterpillars hatch and eat the leaves. Snouts, also called millers, are common in the northeastern United States and across the southern states into South America.

They are famous for mass migrations of biblical proportion in the southern and southwestern states. The biggest we know of was in September of 1921 when an estimated six billion snouts flew over Texas; the front stretched for 250 miles, and the flight lasted 18 days. In June of 2012, clouds of snouts suddenly appeared in Brownsville, Texas in numbers that warranted press coverage. You can read the report from the Brownsville Herald by clicking here.

The butterfly in the picture was far from Texas and seemed to be the only one of its kind enjoying the Brooklyn flowers that day. Here's a thought for all the butterflies that live in New York City:

"Once I read a story about a butterfly in the subway, and today, I saw one. It got on at 42nd, and off at 59th, where, I assume it was going to Bloomingdales to buy a hat that will turn out to be a mistake -- as almost all hats are." -- Nikolaus Laszlo, Nora Ephron, and Delia Ephron, from You've Got Mail.

Posted by Julie Feinstein at 5:08 PM No comments:

The European wool carder bee was introduced to the United States accidentally from Europe before 1963, when it was found in New York State. Since then it has thrived and spread across the country and southern Canada. I saw this one sitting on a leaf in Brooklyn Bridge Park -- the first I have seen.

The wool carder bee gets its name from how the female collects nesting material: she scrapes plant hairs from the surfaces of fuzzy leaves. Carding is one of those words that everyone used to know and few now do. It means to comb and disentangle wool or other fibers. She carries the bundles of collected or "carded" nursery wool under her body to the nesting site. Standing in a garden some place far from the noise of New York City you can actually hear the sound of a female wool carder scraping leaves.

There are lots of different kinds of bees out there! If you take time to stand by a patch of blossoming wildflowers on a sunny day you may be amazed at how many different colorful insects you can see, including big fuzzy bees at work. 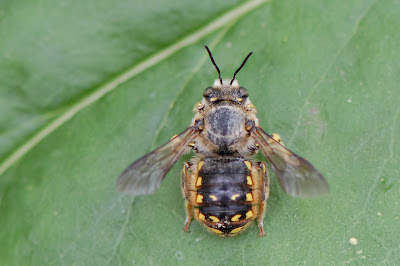 Posted by Julie Feinstein at 4:09 PM No comments:

There are a few dozen kinds of ladybugs that live in New York. Lately, I keep seeing amorous couples of the variegated ladybug, Hippodamia variegata. The species was introduced from Europe.

It is not very hard to identify ladybug species. Don't only look at their spots. The pronotum -- the section between the head and the wings -- has markings that are distinct for each species. Click here for a guide to some common species.

I am searching for the nine-spotted ladybug, Coccinella novemnotata. It has been the official insect of New York State. It is a native species that was once the most common ladybug in the northeastern United States. Beginning around 1980, though, its numbers began to decline and it is now rare.  It may have been displace by introduced species. I don't have a photo of it because I have never seen one.  To see a picture and read a little of its history, click here.

If I find a nine-spotted ladybug, I will take a picture and upload it here. I'll also upload it to the Lost Ladybug Project site where it will be added to a study of ladybug populations across the continent. The project relies on data collected and contributed by amateurs.

It was about 9:00 a.m. on a Saturday morning and past a raccoon's bedtime. Nocturnal creatures like them usually go to bed in the morning and sleep all day. Raccoons typically maintain foraging territories that contain a few sleeping spots that they use regularly. I had to leave for a trip and when I got back the following day the raccoon was gone, presumably after spending Saturday sleeping in my tree. It must have been a very noise-tolerant raccoon to put up with the clatter of the Brooklyn-Queens Expressway.

Raccoons fit into urban settings remarkably well, though we usually don't know they are there. Cities and suburbs provide them with regular meals at trash cans, gardens, pet food dishes, and also shelter in garages, attics, sewers, chimneys, and roof and wall spaces. Hollow trees are a popular favorite if they can be found. The New York State Department of Natural Resources estimates that there are about 100 raccoons per square mile on Long Island. In Central Park, I frequently see a large raccoon sleeping on branches that overhang Strawberry Fields, unconcerned about and usually unnoticed by tourists below. And I've seen them dodging skaters, joggers, and cyclers on busy summer nights on the park drives. They may start out shy, but they can overcome that!

The raccoon is a native American animal about the size of a small dog. It has unusual soft-skinned humanoid hands with five fingers that are not joined by webbing. It has a tail with five to seven dark bands. And it wears a famous bandit mask.

Masks make them look cute and mischievous to us, but why do they have them? Some scientists have hypothesized that the masks reduce glare like the grease marks football players wear under their eyes. Others suggest that masks protect a raccoon's eyes during fights by concealing them against a dark background. Still others think that masks enhance group cohesion and raccoon-to-raccoon communication. But raccoons are solitary and nocturnal, doing most of their business alone in the dark, so these reasons don't quite explain the mask.

In 2005, the scientific team of Newman, Buesching and Wolff compared the habits and habitats of raccoon-like masked mammals worldwide -- animals like badgers, coatis, skunks, wolverines, and others. (Click here to read the original paper.) They found that the masked animals have other things in common. They are mid-sized, terrestrial, not very fast, and share territories with at least one larger carnivore. If raccoons or their masked counterparts are attacked on open ground they will probably stand and fight, being unable to escape by running away. But despite their small size and slow speed, none of the little masked animals are easy prey. In a fight with a bear, a coyote, or a bobcat, the raccoon would probably lose but could do a lot of damage. The study concluded that the raccoon's mask is a form of aposematic coloration -- a visual announcement that raccoons are dangerous. An animal (or insect, or plant) with aposematic coloration wears a color or bright pattern as a warning. Raccoons typically hunt for food with their noses to the ground, so the bright contrasting face is not seen until they raise their heads. The bold black and white facial pattern is visible at night. They can lift their faces and reveal the pattern suddenly and startlingly.  Predators learn to avoid raccoons.

People should avoid them too. They look cute but they can be dangerous and should be viewed from a distance. 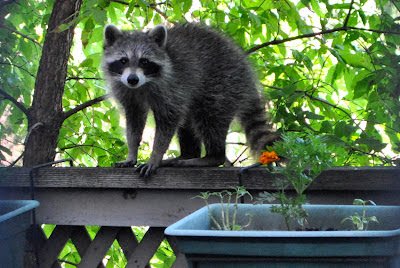 The moth in the picture is hovering in the air while sipping nectar from a wild bergamot blossom. I spied it in Brooklyn Bridge Park this week. Initially, it is easy to mistake this fat furry reddish moth for a tiny hummingbird. Then it comes into focus and you see the antennae, the proboscis, and all the legs. In all the photos I took of this moth, it rested its front pair of legs on the blossom while drinking.
Posted by Julie Feinstein at 5:04 PM 8 comments: