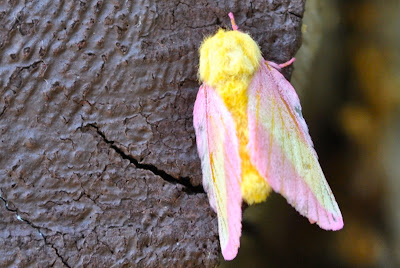 The rosy maple moth, Dryocampa rubicunda, of Atsion Lake, New Jersey. The furry pink and yellow adult in the pictures was photographed in April. The larval stage of the rosy maple moth feeds on maple leaves.
Posted by Julie Feinstein at 12:32 PM 2 comments:

This grasshopper is also called a herringbone grasshopper for its boldly patterned hind legs. The local population is underground now -- overwintering as eggs. They'll be dormant for a few more months, then hatch when warm weather returns. (Hopefully they won't be fooled by the current warm spell in New York City.)

Posted by Julie Feinstein at 2:36 PM No comments:

A few pairs of dabbling ducks. Dabblers do not dive to feed. Instead, they tip over at the water surface with their heads underwater and their tails in the air.
If you like this blog, you can follow it by clicking one of the two options at the right and down a bit, "Followers" or "Facebook Blog Trail." ;-)
Posted by Julie Feinstein at 4:29 PM No comments:

Osprey leave the Forsythe National Wildlife Refuge in New Jersey, where the above picture was taken, in early September. They spend the winter along the coasts of Central America and southern North America, and throughout much of South America.


Northern pintail ducks breed in summer in Northern Eurasia, Alaska, and across Canada. They fly south to spend the winter along the east and west coasts of North America and across the southern half of the United States and into South America. Some pintails, like the ones in this photo, end up at the Forsythe Refuge in south Jersey.

The ospreys are gone, but the pintails are back. Yay!
Posted by Julie Feinstein at 5:45 PM No comments:

Birdwatchers call them "hoodies." I saw this pair and lots more of them at the Edwin B. Forsythe National Wildlife Refuge in Oceanville, New Jersey, on the day after Thanksgiving. The little ducks are about 20 inches long, have a wingspan of about two feet, and weigh between one and two pounds. They are found throughout the eastern half of the United States and in the Pacific northwest year round, and in various parts of North America for winter and breeding. (Click here to see a map if you are interested.) Hoodies are diving ducks, likely to disappear while you are watching them and reappear at a distance in any direction. Underwater they catch fish, crustaceans, and insects, or pick up mollusks and vegetation.
Posted by Julie Feinstein at 9:28 AM No comments: