Posted by Julie Feinstein at 5:28 PM No comments:

I scatter seeds on my porch in Brooklyn Heights for the birds when the weather gets cold. This morning I had lots of visitors. Click on the photos to enlarge.

I had the flu this week and could not go urban wildlife hunting. Here's a collection of urban animals from my archives -- click the pictures to enlarge.

Posted by Julie Feinstein at 4:06 PM No comments:

A Pomegranate for the Cardinals 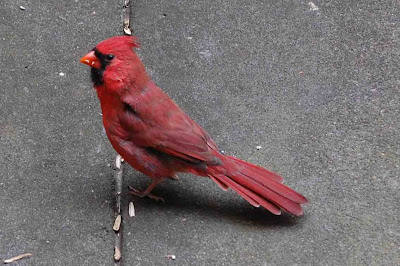 Sometimes I buy a pomegranate, put it on a shelf, and never get around to eating it. You have to be in the mood to get red juice on your hands...

Cardinals are happy to help with that. I cut a dried-up looking pomegranate into bits yesterday -- it was still juicy inside -- and put them on my porch.

A male (above) and female northern cardinal (below) have been visiting ever since. They eat seeds and fruit, so  pomegranate pips must seem like the perfect food -- a seed wrapped in a bit of juicy red fruit! 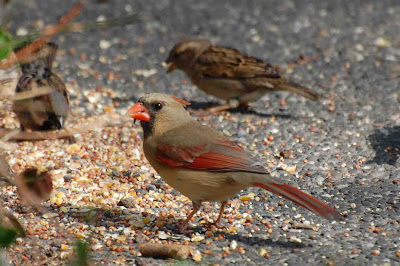 I took this photo of a laughing gull in non-breeding plumage at the end of September in southern New Jersey. Laughing gulls, Leucophaeus atricilla, loose their sleek black hoods as summer ends. Breeding season is over by then and they no longer have to look their best to impress potential mates.

If you didn't know better you would think they were different birds in summer when they look like the picture below.

Even the winter plumed ones are gone from the northeast now, having flown to their wintering grounds farther south.

Their photos reminded me of summer, and of this line from Ode to the West Wind by Percy Bysshe Shelley: "If winter comes, can spring be far behind?"
Posted by Julie Feinstein at 5:44 PM No comments:

Thank you to everyone who came to my presentation at the New York City Mid-town Manhattan Library on Tuesday night. I had a great time! Sorry that we sold out of books. You can order one from Amazon.com by clicking here. P.S. The chubby reddish brown squirrels in Union Square are eastern gray squirrels.
Posted by Julie Feinstein at 8:16 AM No comments:

Snow geese are migrating now. They have spent the summer breeding above the timberline in northern Canada and Alaska, Greenland, and Siberia. Now they are heading to warmer places: southern British Columbia, southern North America, and Mexico.

To call snow geese gregarious is an understatement; some flocks contain several hundred thousand individuals. When they land, they can cover the ground like a sudden snowfall. But I like them best when they are flying. Standing near a big flock as it takes wing is such a sweeping phenomenon it is like being in their world: a honking whistling blizzard, a ticker tape parade of falling geese. Go see them at a wildlife refuge, marsh, or farm field near you. Click here to see a video of snow geese in the air. (If an ad pops up, click it away.)

And, from Mary Oliver  -- Snow Geese


Oh, to love what is lovely, and will not last!
What a task
to ask
of anything, or anyone,
yet it is ours,
and not by the century or the year, but by the hours.
One fall day I heard
above me, and above the sting of the wind, a sound
I did not know, and my look shot upward; it was
a flock of snow geese, winging it
faster than the ones we usually see,
and, being the color of snow, catching the sun
so they were, in part at least, golden. I
held my breath
as we do
sometimes
to stop time
when something wonderful
has touched us
as with a match,
which is lit, and bright,
but does not hurt
in the common way,
but delightfully,
as if delight
were the most serious thing
you ever felt.
The geese
flew on,
I have never seen them again.
Maybe I will, someday, somewhere.
Maybe I won't.
It doesn't matter.
What matters
is that, when I saw them,
I saw them
as through the veil, secretly, joyfully, clearly.

A few weeks ago, just before hurricane Sandy, I spent a day at Brooklyn's Coney Island. it was not a big day for urban wildlife, but I saw this fine fat Great Black-Backed Gull at the fishing pier. He eyed me as a potential source of snacks, but flew away when I turned out to be wildlife paparazzi.

The great black-backed gull is easy to identify. It is the largest gull in the world, almost two feet long with a four-foot wingspan. It has a dark grayish-black back, white spots on the tips of the wings, and pink legs. Its bill is yellow with a red dot near the tip. In winter plumage, shown above, it has light dusky streaks on its head.


Coney Island was at its best that day -- hot dogs, cotton candy, carnival rides, sun, surf, and great black-backed gulls. Here are some photos. I Hope Coney Island is back on its feet soon. 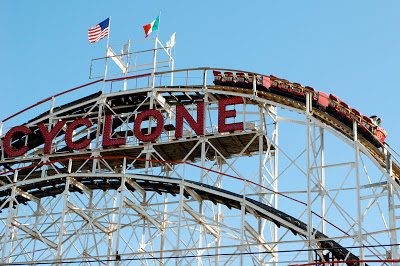 Posted by Julie Feinstein at 6:28 PM No comments:

COMING UP SOON! MARK YOUR CALENDAR!
Here is the flyer the library made for the event.
(I had to cut it in two to fit this format.) 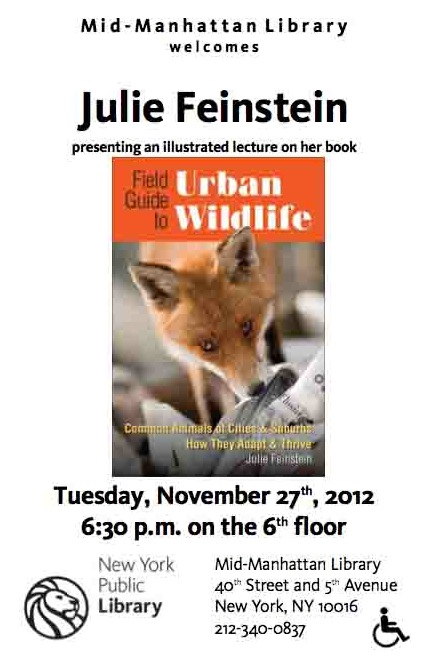 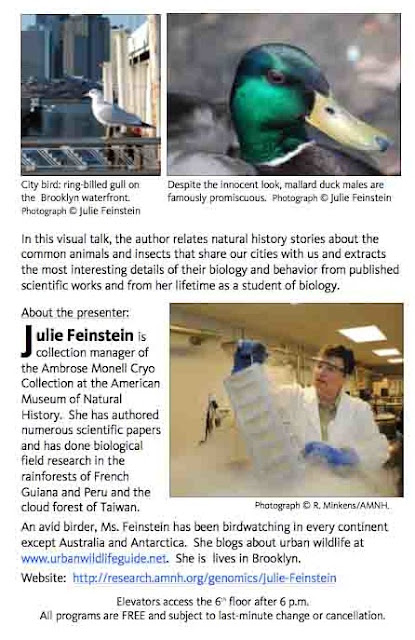 Posted by Julie Feinstein at 4:28 PM No comments:

Pine Siskins at the Brooklyn Bridge

I saw a flock of pine siskins in Brooklyn Bridge Park a few weeks ago. Just behind the row of red bushes in the photo above, the little birds were collecting seeds from plants and grasses. They chatted softly while they flitted from plant to plant, sometimes fluttering to stay balanced while perching on the end of a stem. When pine siskins fly we see flashes of yellow feathers on their wings and at the base of the tail.

Pine siskins are residents across southern Canada and at high elevations of the western United States. They breed in western Canada. In winter they sometimes migrate south, or irrupt, into other areas. They move further south in eastern North America and into lower elevations in the west. Changes in food availability are thought to inspire irruptions. Some years the siskins stay put, other years they suddenly appear in New York parks and gardens.

Pine siskins eat seeds of conifers like pine, cedar, hemlock, larch, and spruce. They also eat seeds of birch, sweet gum, maple, and alder. And they eat the tiny seeds of grasses, dandelions, ragweed, and other plants. They occasionally snack on an insect or spider. They are happy to come to feeders for thistle and sunflower seeds.

Pine siskins sometimes travel with other irruptive migrants like crossbills, redpolls, purple finches, evening grossbeaks, and goldfinches. Birdwatchers call these the winter finches; I hope to see some of them in Brooklyn Bridge Park, too! But the park has been closed for a week because of hurricane Sandy and has just reopened. I'm on my way out to look for finches. I'll report back.

The siskins may have been carried far away by the storm. (Click here to listen to a short NPR interview describing how birds can travel inside a hurricane's eye.)

Posted by Julie Feinstein at 1:24 PM No comments: 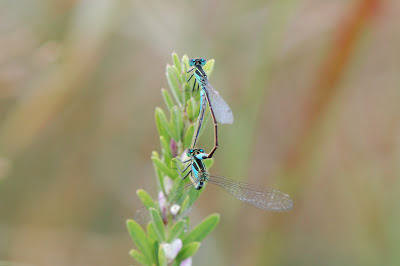 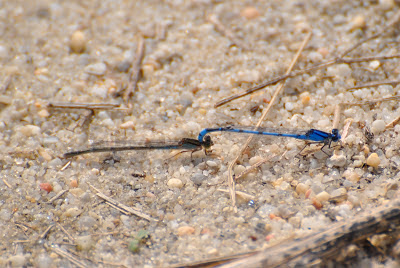 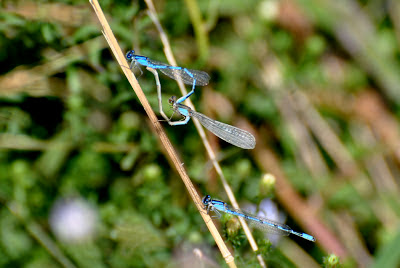 This little butterfly would be easy to miss if not for the flashes of bright orange as it flits about in its active flight. The butterfly is only about an inch across. It usually flies within a few feet of the ground, often landing and spreading its wings; that's the time to sneak up and take a close look.

Its forewings are orange with black spots and a gray border; underneath they are similar but lighter colored. The hind wings are gray above with orange patches at the rear; underneath they are lighter gray with black spots and a zigzagged orange line at the edge. As is typical for members of the butterfly family Lycaenidae, the common copper has black-and-white ringed antennae and its eyes are outlined with white.

The common copper is also called the American copper and the small copper. It is found throughout North America, Europe, Asia, and in some parts of North Africa, visiting habitats from woodland clearings to city lots. But only when it's warm and the plants are green. This is about the end of the season for common copper butterflies in New England. Or, as Mother Goose would say:

Butterfly, Butterfly,
Whence do you come?
I know not, I ask not,
Nor ever had a home.
Butterfly, butterfly,
Where do you go?
Where the sun shines,
And where the buds grow.

Posted by Julie Feinstein at 12:07 PM No comments: