Posted by Julie Feinstein at 4:02 PM No comments:

I was walking on the path that circles Pakim Pond in the Brendan T. Byrne State Forest in New Jersey last week. I walked into a gossamer thread that I thought was a spider web. I turned out to be a caterpillar's silken support line. I looked down and saw a "twig" sticking out of my shirt. I was fooled into thinking it was a piece of wood. I tried to brush it off, but it stayed put. I looked more closely. It was a caterpillar!

The caterpillar in the photo above is standing on four pro-legs (leg-like stumps with grippy hooks) that are firmly latched to my white shirt. Its head end is sticking out. You can see three pairs of tiny legs just behind the head. If you look closely you can see a thread of silk dangling from the head; it's the caterpillar's belay line. The strand would normally help support the caterpillar's head end while it leaned away from a plant stem, allowing it to stay horizontal to the ground in a twiggish attitude.

Looking like a twig helps the caterpillar evade sight-hunting predators. It will eventually become a small brown bark-camoflaged geometrid moth. I took it off my shirt and put it on the plant below. Looks like a little piece of fallen wood, doesn't it? 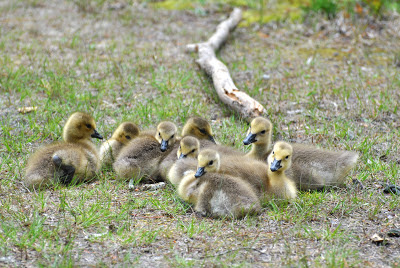 Posted by Julie Feinstein at 10:03 AM No comments:

A Walk in the Park

Posted by Julie Feinstein at 7:00 AM No comments: