The last dragonflies of the year -- or are they?

I watched this green darner dragonfly couple laying eggs in the new pond at Brooklyn Bridge Park. The male is in front, clasping the female by the head. They mated just a few minutes before.

They worked like a couple on a bicycle-built-for-two, taking a few synchronized steps forward or back as she found spots she liked. Her abdomen has a sharp tip to make little slits in aquatic vegetation. She makes a slit, places an egg, and then they move on. The couple flew from branch to branch, scattering their eggs.

This is the beginning of a dynasty for that pond. The eggs will soon hatch into larvae that will spend the winter (and several more years and developmental stages) actively hunting under water. Dragonfly larvae are voracious predators of other aquatic insects; in a pond too small for fish, the dragonflies will be top predators.

Green darners are the largest, most abundant, and most common dragonfly in North America. Adults are about three inches long with a four-inch wing-span. They have green bodies, yellow leading edges on their wings, and a blue-yellow-and-black bull's eye mark on the "forehead" between the eyes. The male has a handsome blue abdomen.

Green darner adults are so good at catching and eating mosquitoes that they are commonly called "mosquito hawks."

Some populations of green darners migrate south to warm areas at summer's end. Their descendants fly north in spring. Adult populations of northern residents and migrants spend the mosquito days of summer side by side. Larvae are at work below the water's surface year round.

And starting this year in the new pond at Brooklyn Bridge Park!

Posted by Julie Feinstein at 12:54 PM No comments: 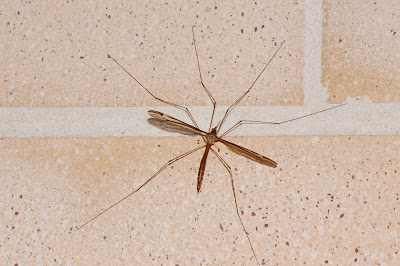 Good news! This is not a giant mosquito! It's a crane fly in the family Tipulidae, one of over 1500 kinds in North America.


The one in the photo is a female. You can tell because her abdomen ends in a point. She has a sharp looking organ there called an ovipositor that looks dangerous but is only used to lay eggs, not to sting.
Some crane flies have wings that span over two inches. They all have a v-shaped groove on their back. Like most flies, they have paired halteres, club shaped organs that stick out of their sides just behind the wings. Halteres are the vestigial remains of a pair of wings lost over evolutionary time. (Most of the other insect groups have two pairs of wings.)
Flies are usually so small that you need a magnifying glass to see their halteres, but on big crane flies they are proportionately large. You can see them in these photos. Halteres wave around during flight and act like gyroscopic stabilizers. But halteres don’t help big awkward crane flies go any faster so they are easy prey for birds, frogs, fish, and other insects.
The next time a crane fly enters your home you can relax. It's not a mosquito. It won’t bite. Phew.

Posted by Julie Feinstein at 1:33 PM No comments:


Box turtles are small, typically about 4 or 6 inches long, and they take a long time to get that big. Their average life span is about 50 years, with some individuals living past 80. That's a blessing and a curse.

They don't reach sexual maturity until around age seven. Mature females only lay about 6 soft leathery eggs each year, in spring or summer. She covers them with dirt and then she leaves. The eggs take a long time to develop, hatching in late summer or in autumn. Meanwhile, raccoons, skunks, and foxes dig them up and eat them. So few offspring are born and populations replace themselves slowly.

A box turtle can pull in its head, legs, and tail, and then close the shell completely; the lower half is specially hinged to allow this. But their shells don't protect them from everything. During the past century their preferred habitats or woodland and wetland were converted to farms and then into suburbs. More roads mean more car fatalities for box turtles.

The turtles are terrestrial, usually found in grass or woods, not water. They are not good swimmers. On hot days they may cool off in mud or even soak at the edge of a shallow pool, but they avoid deep water. Hatchlings and youngsters are very shy; they stay in the undergrowth and are rarely seen. Eastern box turtles ranges from Massachusetts to Florida west to the Mississippi River, and north to the Great Lakes. The one in the picture was crossing a path in a New Jersey park on a hot September day in 2010.

They eat insects, worms, slugs, fruits and berries, mushrooms (even some that are toxic to humans), plants, and carrion. Those that live in the cold north hibernate in the ground during winter by digging into loose soil. The colder it gets, the deeper they go.

The eastern box turtle in the picture has bright orange markings on its typically tall dome-shaped shell. Individuals may also be yellow, tan, brown, or olive. Males are brighter than females and are famous for their bright orange or red eyes (brown in females). Adults are brighter than youngsters. So the turtle in the picture looks like an adult male. Their pretty colors work against them. Poaching for the domestic and international pet trade threatens them.

Box turtles were added to the CITES list in 1994 -- the Convention on International Trade in Endangered Species of Wild Fauna and Flora -- the agency closely regulates exportation and commercial trade. Many states legally prohibit collecting box turtles from the wild too. So step away from the turtle! Put your hands up!

Posted by Julie Feinstein at 4:58 PM No comments:

There are not very many caterpillars that look like Christmas candy. But stinging rose caterpillars come in red, orange, and yellow with purple and cream pinstripes. I think of them as cherry, orange, and lemon. They are about an inch long -- bite-sized --  and flamboyantly decorated with spine clusters and spiked horns.

But they are far from delicious. In fact, you can't even touch them. Their pretty spines can break off and cause an irritating skin rash, a hypersensitive reaction, and other complications  serious enough to be called stinging rose caterpillar poisoning.

An attacking bird that gets a painful mouthful of one of these will probably remember the mistake and avoid gaudy caterpillars in the future. Wearing bright colors as a warning about how dangerous you are is  called aposematic coloration; it is common among insects.

Stinging rose caterpillars can be found on many familiar woody plants like apple, cottonwood, hickory, dogwood, redbud, sycamore, and on blueberry and rose bushes. The two pictured here were having a meal of bayberry leaves by the side of a road in Cape May, New Jersey.

There is more information about urban insects in my book,  Field Guide to Urban Wildlife, which will be published by Stackpole Books in spring 2011.
Posted by Julie Feinstein at 5:06 PM No comments:


This dragonfly couple was mating by the side of a pond in Cape May, New Jersey. It is not immediately clear what’s going on or who is doing what. Which one is male? Female? What’s with the head-grabbing?
They are in a common dragonfly reproductive pose called a mating wheel.  The male is the one holding on to the stick. He prepares to mate by producing sperm from genitalia at the tip of his abdomen, and then transfers it to receptacles under his belly.
Then he flies off to find a female. He grabs her by her head with clasping hooks at the end of his abdomen that precisely fit females of his species. They fly around at this stage, attached claspers-to-head, in a position called a mating chain. (The male flies while the female dangles.)
Eventually they land. In the photo, the female is curling to pick up the sperm with genitalia at the tip of her abdomen. They remain in the wheel (some call it a heart) for about 15 minutes.
The Halloween pennant is a common dragonfly in eastern North America. It is named for its colors and for posing with its bright wings streaming behind. It eats mosquitoes, gnats, and flies, which it catches in the air in a sort of basket formed from its six spikey-haired legs.
There is more information about urban insects in my book,  Field Guide to Urban Wildlife, which will be published by Stackpole Books in spring 2011.
Posted by Julie Feinstein at 5:55 PM 2 comments: