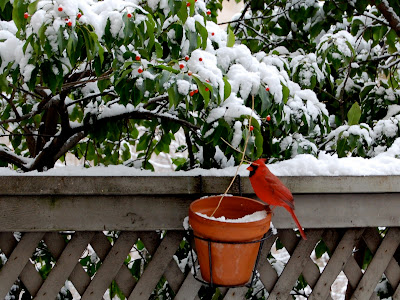 There are lots of geese in American cities and suburbs. We see them grazing on lawns and flying overhead. Most of them are Canada geese, big birds 30 to 40 inches long that can weigh up to 20 pounds. The Canada goose has a black head and neck, grayish brown chest and body, a white patch under the tail, and a distinctive white chinstrap mark. I will say a lot more about Canada geese in a later post, but today I want to point out a similar looking but less common relative, the Brant goose.

Brant geese are only about 25 inches long and weigh around three pounds. They are just a bit larger than mallard ducks. The Brant goose has a black head, neck, and chest. Seen from a distance it looks dark overall. Closer inspection shows a brown back, lighter underparts, and a patch of white below a short black tail. Their bills are relatively short. The broken white patch on a Brant's neck looks like a necklace or an incomplete collar. (Brant can be singular and plural like sheep, but it is also ok to say Brants.)

Brant are primarily saltwater geese so they are not usually found far inland (although they take occasional forays to agricultural fields to snack on grains and grass.) They usually eat marine plants like eelgrass, sea lettuce, and other seaweeds. They have special glands that filter salt water from their systems and enable them to live on salty plants.

Brant geese breed far away in the northern tundra. They migrate thousands of mile to spend the winter along both coasts of North America. So if you see geese offshore during winter, take another look -- they might be brant. I took these photos of Canada geese and Brant in the same spot on the Brooklyn side of the East River near Fulton Ferry Landing under the Brooklyn Bridge. (The East River is a tidal estuary so it is comfortably salty for the Brant.)


Brant are accustomed to rough ocean water. I watched them doing something that Canada geese wouldn't even think about doing -- diving into the foamy waves caused by boat wakes crashing on rocks near the shore.
Posted by Julie Feinstein at 8:54 AM No comments:

With ornithological practicality, the little warbler with a bright patch of yellow feathers at the base of its tail is called the yellow-rumped warbler. It is one of a group of small, primarily insect-eating birds called the wood warblers. We mainly see wood warblers passing through New York City in spring on their way to northern breeding grounds or heading south in autumn.
They are about five inches long, stripy brown, weigh less than half an ounce, and have patches of yellow on rump and sides. In summer they are brighter and have white patches on the wings and face.
Some yellow-rumped warblers spend the winter in New York. (Others can be found in winter throughout the northeast, across the southern half of North America, in Mexico, and throughout Central America.) You might see yellow-rumped warblers in places as varied as forest edges, coastal shrubs, or backyards and parks.
The one pictured here was foraging about a month ago at Alley Pond Park in Queens in New York City -- at the nexus of the Cross Island Parkway, the Grand Central Parkway, and the Long Island Expressway.  Yellow-rumped warblers are clearly not troubled by traffic! This bird might have been evaluating the neighborhood as a winter retreat, or just stopping off to eat something on its way south. It may in fact be visiting a feeder in Miami right now, or even feasting on tropical caterpillars in Guatemala.
But if it stayed its diet would change from mostly insects to mostly fruit. The yellow-rumped's digestive system is even uniquely adapted to allow it to eat bay berries and wax myrtle berries. Not surprisingly, one of its other common names is the myrtle warbler.
Yellow-rumped warblers are famously clever foragers. They flit from tree to tree, gleaning insects. They pick insects out of spider webs and off water surfaces. The one in these pictures was taking advantage of another bird's work. See the rows of holes in the tree? They were made by a yellow-bellied sapsucker. The sapsucker is a kind of woodpecker that specializes in drilling holes in trees, eating some of the live cells, and licking up tree sap with its bill inserted in the hole. Sapsuckers always make their holes in neat rows like those shown in the photos. Insects get accidentally trapped in the sticky sap at the holes. Other kinds of birds visit sapsucker holes to snack on sap and sticky insects. 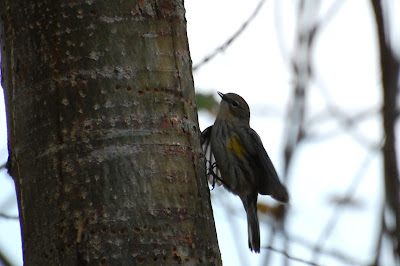 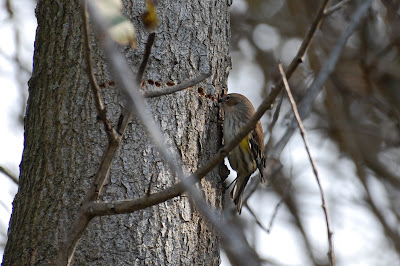 It's 30 degrees and windy in New York City today. As I scattered seeds on my Brooklyn porch for the birds this morning I couldn't help thinking about the coming winter and how it will impact the birds. Some of them, like the northern cardinals and the pigeons, will stay here through the winter; they are called residents. Others, like robins and blue jays, have mixed feelings about leaving; some of them migrate but some don't. Still other birds, like winter wrens, migrate to here to spend the winter from even colder places further north. Regardless of the migration plan, winter causes upheaval; the birds face either a long cold season or a long round trip.

The baby birds pictured below were all born this summer in New York City despite noise, pollution, and about eight million people. Despite all that and snow, ice, and freezing temperatures, or a trip to Florida or Mexico, they will be here next spring to start families of their own.


Posted by Julie Feinstein at 5:37 PM No comments: