White-throated sparrows are back and they love black oil sunflower seeds! Three of them have been coming to my Brooklyn porch for breakfast all week.

Most white-throated sparrows spend the summer breeding season in Canada. Then they migrate south to spend the winter in the eastern and southern states, on the west coast, and in northern South America.

I usually hear white-throated sparrows rustling in the leaves before I see them. They forage for insects and seeds in brush piles and under bushes. They flick their heads to toss leaves aside. They use both feet to scratch backward and then jump on anything they scare up. They spend a lot of time on the ground, hopping instead of walking.

Their habitat is usually described as woods and forest edges, but they like parks too and they are at home in extreme urban landscapes like New York City where they forage side by side with house sparrows. The white-throated sparrow is brown above and grey below, like a house sparrow, but it is distinguished by a striped head, a yellow spot between the eye and the bill, and, of course, a white throat. 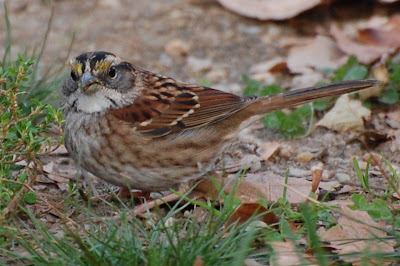 Posted by Julie Feinstein at 4:58 PM