Remember the spider I wrote about last week? The one that makes cobwebs on my ceiling? She had an eventful week!

First, she shed her skin! She molted! On Monday morning, there seemed to be two spiders where there had been one. Closer inspection revealed this:

That's her old skin on the right. It's stuck in her invisible web on the ceiling next to the light outside my bathroom. Notice how the spider's new legs are almost transparent? After spiders and insects and other things with external skeletons shed, they are softer, lighter colored, and more flexible than usual -- like soft-shelled crabs. They are actually incapacitated while they wait for the new skin to harden. Our girl sat still next to her old skin from Monday through Thursday, while her new skin dried, hardened and darkened. The new skin has tiny folds that expand to accommodate her new bigger size. Apparently my home provides enough insect prey to support a growing spider. Come to think of it, I haven't seen any other insects in here lately.

Then, she got a boyfriend! On Tuesday morning there really were two spiders where there had been one! He is on the left in the photo below. 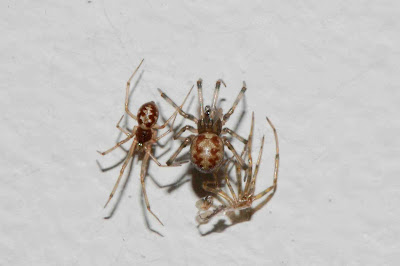 All I saw of their relationship was the two of them sitting motionless side by side, but chances are good that there are spiderlings in our future. To mate, a male spider spins a "sperm web," and deposits sperm in it using sex organs on his rear abdomen near his silk spinning organs. Then he takes sperm from the web with a pair of organs near his mouth, called pedipalps. When he gets the chance, he inserts his pedipalps into paired sperm receptacles under the female's abdomen. Both genders have pedipalps, which look like very short legs -- females use theirs for touching things and handling food. Mature male pedipalps have enlarged ends that look like tiny boxing gloves.

By Friday morning the female's new skin had hardened. She had a spurt of activity and ran around for a few feet in all directions in her new outfit. She returned to the center, near her old skin, and approached the male. They faced each other with their front legs spread wide. When they both suddenly and unexpectedly fell from the ceiling, I squeaked and ran away. We all recovered quickly. They climbed up threads. I went back to watching them. They went back to sitting motionless.

On Saturday morning the male was gone.

Things are back to normal. But the female is bigger and possibly inseminated. If she has eggs she will spin a protective case of silk and hang it in her web. We'll know before long!

Posted by Julie Feinstein at 5:00 PM