I had two days off from work in February: Abraham Lincoln's birthday on the 11th and George Washington's birthday on the 22nd. I was thinking about presidents when an urban wildlife picture popped into my mind -- the equestrian statue of Theodore Roosevelt at the Central Park West entrance to the American Museum of Natural History in Manhattan with a pigeon on his head. I see the statue on most week days and there is usually at least one pigeon on it, sometime on Ted's head, sometimes on the horse's head.

When the pleasant weather lured me outside this weekend I decided to look for presidents in Manhattan. I predicted that I would  probably find a pigeon near, if not on, every president I found. I have nothing profound to say in my blog today except that I was right. Here is the photographic evidence... 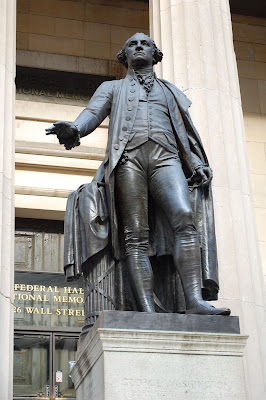 This is the statue of George Washington at Federal Hall across from the Wall Street Stock Exchange. Washington was inaugurated here in 1789. 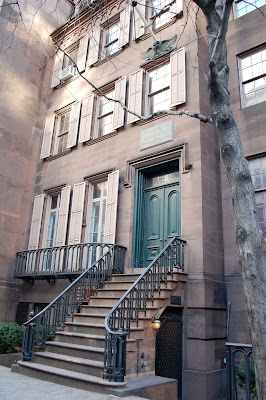 Theodore Roosevelt was born in this brownstone house at 25 East 20th Street on October 27, 1858 and lived there until he was 15 years old. 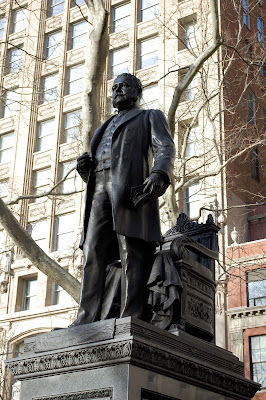 This statue of our twenty-first president, Chester A. Arthur, stands at the north end of Madison Square Park, near 26th Street.

The ancestors of urban pigeons were cliff dwellers, and one of the things the birds like about us is our buildings. The roofs and ledges of Manhattan skyscrapers provide perfect pigeon nesting sites. The narrow claustrophobic tower-shaded streets around the Wall Street Stock Exchange make pigeons feel at home.


Posted by Julie Feinstein at 6:54 PM