On Saturday morning I walked through the garden of the River Cafe -- that's on the Brooklyn side of the East River under the looming towers of the Brooklyn Bridge. A pair of dark-eyed juncos was foraging there under a bare tree.

As I watched, the birds hopped, pecked, and scratched, finding small things to eat in the grass and dirt. Their diet includes seeds, nuts, grains, berries, and insects. The juncos meticulously avoided stepping into the sunlight while they foraged, deliberately working inside the lines of shadow cast by the leafless tree branches. Perhaps they feel comfortably camouflaged in shade. I waited a long time for them to step into the sun for these photos.

Dark-eyed juncos are common but unobtrusive so you may not notice them. They are found throughout North America. They look somewhat different across their broad range, and quite a few subspecies are recognized. The one that is at home in New York is called slate colored. Males and females are about 6 inches long with pink legs and pale pink bills. Males are slate gray above with white bellies and white tail edges that show in flight. Females share that pattern, but they are paler and have a bit of brown in their plumage.

Juncos are present year-round in some areas, like from the Rock Mountains to parts of the Pacific coast, and in parts of the Northeast and the Appalachians. But most of them migrate to Canada to breed and then head to southern states for winter, where their arrival signals the beginning of the season and they  are known as "snow birds."

The garden under the Brooklyn Bridge is noisy with traffic sounds. Oh, and construction, helicopters, fire sirens, police boats, and jets. But I could still hear the junco's musical trill above it all; their simple song sounds like an old-fashioned telephone ringing. It reminded me of something Charles Lindburgh said when he was interviewed shortly before his death in 1974: "...if I had to choose, I would rather have birds than airplanes." 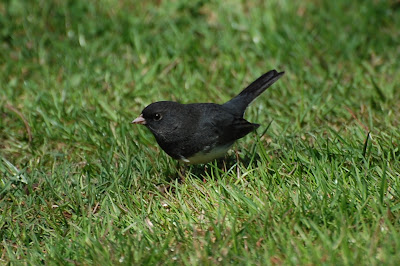 Posted by Julie Feinstein at 6:12 AM