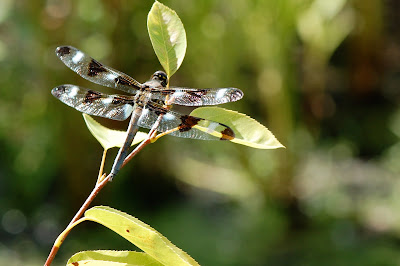 Whatever you call it, it's a good summer sighting. This one was perched by the pond in Brooklyn Bridge Park in New York City. We can conclude that it is not too sensitive to human activity or noise. Like other dragonflies, the 12-spot eats insects. I am particularly thankful for its voracious appetite for mosquitoes. It devours them in its adult form AND when it is an aquatic larva. It is a mosquito's worst nightmare -- first aquatic dragonfly larvae zip around the pond eating mosquito larvae and pupae and then, just when the adult mosquitoes get out of the pond, along comes a hungry adult 12-spotted skimmer!
Posted by Julie Feinstein at 8:08 PM