The temperature was below freezing in Brooklyn last night for the first time since last winter. This morning a cold wind is shaking dry leaves on trees outside my window. Bird courtship is not the first thing that comes to mind. But if you dress warmly and go to the local park pond you will find male mallard ducks in shiny breeding plumage. They are courting females now! 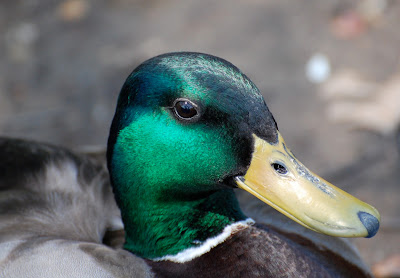 The male mallard has an iridescent green head, a narrow white neck ring, a chestnut-brown breast, a black rump, light gray under-parts, and a white-bordered violet-blue speculum (the brightly colored stripe near the trailing edge of the wing). His bill is greenish yellow. The female is light mottled brown overall with a darker brown line through the eye, a dark brown streak on the crown, and an orange bill splotched with black. Males and females have dark eyes and orange legs and feet. They are about two feet long, have wings that open to about three feet, and weigh a few pounds.

Mallards begin choosing mates and forming couples as early as September and will keep it up all winter until it is time to lay eggs in spring. Groups of males gather around females and perform ritualized behaviors competitively, showing off their feathers and fitness, sometimes performing the same moves simultaneously or sequentially.

Click here to see a video of some of what they do. In the video, one male rises from the water arching his neck in a display called the grunt-whistle (he makes distinctive sounds with the posture). Two ducks in the upper right simultaneously dip their bills and raise their tails in the down-up display. Another performs the sexy tail-shake. A little brown female swims into the lower right of the picture at the end of the clip; it's all for her.


The movements are performed in just a few seconds, so knowing what to look for makes it easier to see. Here’s a link to an old scientific publication that contains drawings of eight mallard displays --  click here and then scroll down to the illustrations. A duck will often perform a preliminary head-shake or tail-shake before doing one of the more elaborate displays. Good luck peeking in on mallard sex lives!
Posted by Julie Feinstein at 4:07 PM