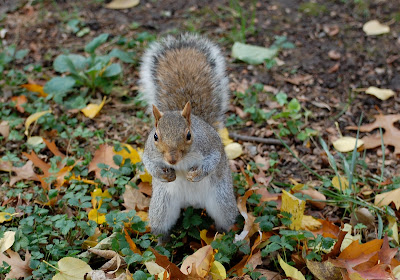 There is Republican primary coverage on television. Through the window near the TV, I see a squirrel  tightrope walking on the porch fence.

The juxtaposition reminds me of Ronald Reagan and the White House squirrels. He fed them, and they reportedly gathered outside the Oval Office and looked in at White House doors and windows, anticipating treats. The President brought back acorns for them from Camp David, the presidential country retreat in Maryland. The Reagans' 1984 Christmas card, a painting by Jaimie Wyeth, called "Christmas Morning at the White House," shows a squirrel leaving a trail of footprints in snow on its way to the White House door. (Click here to look at one that's being sold for $85.00!)

The relationship of the White House squirrels with other human occupants has been both good and bad. In 1921, President Harding's first lady, Florence, championed animal welfare, including the protection of squirrels on the White House grounds. President Truman fed the squirrels while taking his meals outside on the south porch. The nation was charmed when in 1949 a five-year-old visitor expressed concerns about the White House squirrels, and Truman appointed him to feed them (at no cost to the taxpayers). The story appeared in newspapers across the country; click here to read one.

The chummy relationship came to an abrupt end with the Eisenhower administration. Eisenhower was a golfer. When he had a putting green installed on the lawn a short distance from the Oval Office, the squirrels started burying nuts there. Eisenhower was reportedly infuriated about all the holes and bumps. After attempts to scare the squirrels away failed, a few were trapped and released somewhere else. Boy did he get in trouble for that! His opponents in Congress depicted him as an enemy of wildlife. The squirrel trapping campaign was suspended. 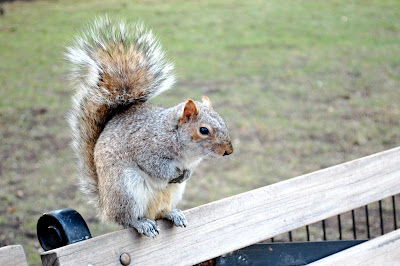 During the Carter administration, the National Park Service studied squirrels in downtown Washington. They found that Lafayette Park, the seven-acre park across Pennsylvania Avenue north of the White House, had an extremely high number of squirrels -- more than 100 -- probably supported by the constant stream of squirrel-feeding and snack-dropping tourists.

The George H.W. Bush years were challenging for the squirrels -- the Bush family dog, a Springer Spaniel named Millie, habitually chased the squirrels. During the Clinton years, when squirrels attacked the White House tulips, the gardeners placed peanut-filled feeders on the South Lawn and in the Rose Garden to draw them away from the flower beds. Like deja vu, George W. Bush's dogs also chased the White House squirrels.

I wonder how the squirrels are getting on with the Obamas. Is Bo a squirrel chaser? The President mentioned the squirrels last year during an East Room ceremony celebrating America's Great Outdoors -- you can watch the video clip by clicking here. (Sorry about the ad before the clip.) But does he feed them? 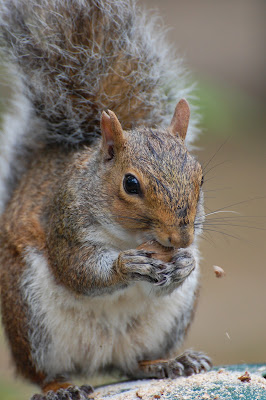 Posted by Julie Feinstein at 4:22 PM