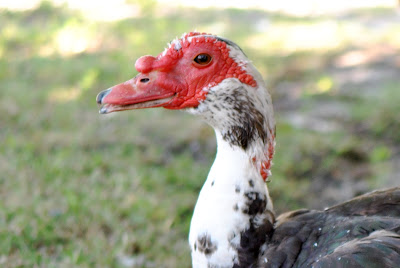 I remember first seeing one of these bumpy red-faced ducks by the Cooper River in Camden, New Jersey, when I was a child. At first I thought it was bleeding, then I thought it must be a mutant. Years later I discovered that's how it's supposed to look! It is one of the most striking looking birds you are likely to encounter in a city park.

If you try to look up the Muscovy duck in a field guide, though, you probably won't find it. (And just when you are thinking that you have found the best field marks ever: a giant brightly patterned duck with red facial skin and a fleshy bump over the bill.) The ones we see in city parks are feral domestic ones, escaped from the barnyard and established in the wild. Most field guides don't include them because they are considered domestic birds.
Wild Muscovy ducks are native to Mexico, Central, and South America. Wild ones are black with glossy greenish backs and large white patches on their wings; they are rarely seen north of Texas in the United States. Domestication produced the all black, all white, and seemingly endless forms of piebald black-and-white that we see in parks.
Posted by Julie Feinstein at 6:03 PM