The insect-eating migrants are returning from their winter grounds, following the insects that come with warmer weather and blossoming flowers. In the past two weeks I have seen a Louisiana waterthrush, a phoebe flycatcher, and a palm warbler. 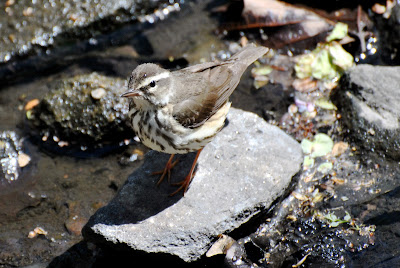 The Louisiana waterthrush pictured above, Parkesia motacilla, was in the small shallow stream in Central Park called The Gill on April 3rd. It is just the kind of place they like to hunt insects. As I watched, it caught a big crane fly. Louisiana waterthrushes spend the winter in Central and South America. They breed in the eastern United States as far north as Maine, so this one might stick around. 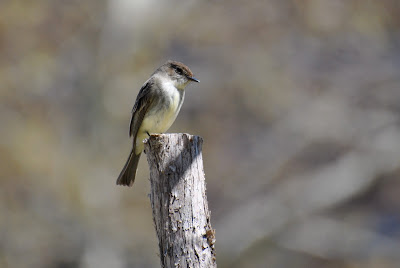 The eastern phoebe pictured above, Sayornis phoebe, was behaving typically by perching on a low branch, flicking its tail, and calling  phee-bee! in a loud raspy voice. The call got my attention and helped me locate the small drab bird. It darted into the air to grab an insect and quickly returned to its perch. Phoebes spend the winter in Central America, Mexico, and the southern half of the eastern United States. This one was in Cadman Plaza Park in Brooklyn Heights on April 5th. Phoebes breed throughout the eastern United States and across Canada.

This palm warbler pictured above, Setophaga palmarum, was in Brooklyn Bridge Park on April 13th. It is passing through New York on its way to Canada to breed. Palm warblers spend the winter along the coasts of the southern states, and in Central America and the Caribbean.
Posted by Julie Feinstein at 5:36 PM