Catbirds at the Picnic

I had lunch on my porch on Saturday. A pair of gray catbirds came out of the shrubbery to look at me. I don't know if they objected to my presence or were just curious.

The gray catbird, Dumetella carolinensis, is about 9 inches long. Males and females look alike. They nest in dense shrubs. The bird gets its common name from its distinctive cat-like meow call. If you make that sound around thick bushes in summer a catbird might jump out to investigate you.

Gray catbirds are related to mockingbirds and are also mimics. Males string together musical phrases which may include imitations of other birds' songs and sounds from the surroundings. They mix in a few nasal squeaks with sweet sounding notes, pleasant whistles, and an occasional meow. Unlike mockingbirds that will often repeat a phrase 3 to 7 times, the catbird usually doesn't repeat phrases but still may sing songs that last for many minutes. The catbirds often sings from the interior of a bush, concealed by foliage. Mysterious!

During spring and summer, gray catbirds are found throughout the eastern and mid-western United States and southern Canada. In autumn they fly to southeastern states and further south to tropical destinations to spend the winter.

Both catbird parents gather insects and fruits to feed their nestlings. I suspect that there is a catbird nest nearby, but I've decided not to pry. I'll stay on the porch and share my grapes. 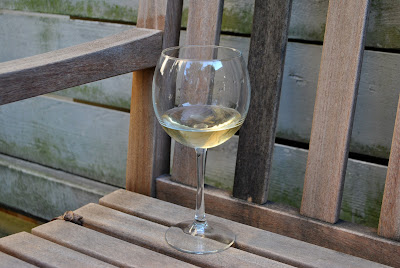 Posted by Julie Feinstein at 6:21 PM