Last February I wrote about a pair of interesting puddle ducks I saw in Brooklyn Bridge Park. Click here for that blog. She was a mallard, Anas platyrhynchos. He was an American black duck, Anas rubripes. She would normally mate with a green-headed male mallard duck. But they appeared to be a couple.

I think I saw the same pair in the same spot today.

When I came upon the pair today, they were performing courtship displays. She had her neck extended and was lying low in the water. He was swimming around her, pumping his head up and down.
He stepped onto her back briefly, they mated in the water, and then he hopped off. He flapped his wings and raised his body in a splashy post-copulatory display. Then he paddled to the shore to nibble at plants and preen. The female dashed around the pond for about ten minutes of post-copulatory splashing. 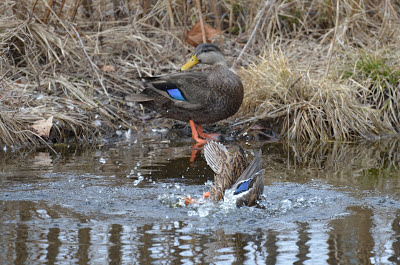 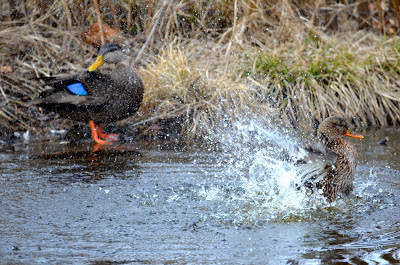 Posted by Julie Feinstein at 5:18 PM