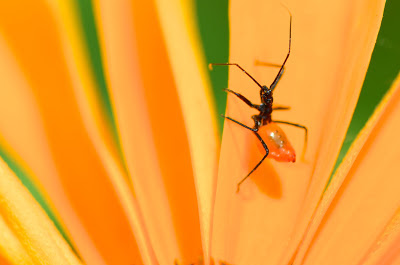 I found a tiny assassin sitting on a yellow flower in Brooklyn Bridge Park last week. It's an immature, or nymphal, stage of an assassin bug.

Assassin bugs are predatory insects in the family Reduviidae. They have long downward-facing beaks that unfold forward. Assassin bugs capture other insects and pierce them with their sharp beaks. Then they inject enzymes to paralyze and dissolve. Then they suck out the victim's liquified insides.

The orange and black nymph pictured above overwintered in an egg that its mother laid on a plant last fall. It hatched this spring and will pass through five nymphal stages until it is a fully grown adult some time this summer.

And it's not just any assassin bug, it is Arilus cristatus -- a wheel bug!

The wheel bug is one of the largest terrestrial bugs in North America. Adults are about an inch and a quarter long. It is named for the cog-shaped armor on the adult's back.

If you get a chance, check the foliage around the Pier 1 entrance to the Squibb Park Pedestrian Bridge this summer. At least one great big wheel bug will be hunting there.
Posted by Julie Feinstein at 7:13 PM