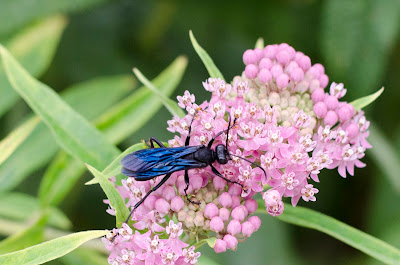 Great black wasps are sometimes called katydid-killers. It's no coincidence that I see them in Brooklyn Bridge Park where there are flowers (for nectar) and katydids (for baby food) -- everything a great black wasp could want. Click here to see the greater angle-wing katydid, Microcentrum rhombifolium, that I wrote about last summer.
Posted by Julie Feinstein at 6:16 PM