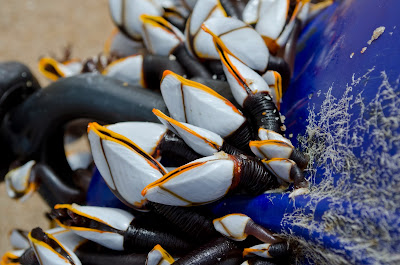 As surprising as it now sounds, in ancient times these barnacles were thought to be the immature stage of a bird called the barnacle goose (Branta leucopsis). The shell and stalk kind of resemble the head and neck of a white-faced goose, right? Barnacle geese migrate to Britain and Ireland to overwinter there, but they nest elsewhere. Once upon a time, finding no nests, eggs, or chicks, people concluded that the birds grew from gooseneck barnacles until fully feathered and then sprang out of the sea. Very imaginative!
Posted by Julie Feinstein at 6:12 PM