New York City smells fabulous this week. It's one of those times I pass up urban wildlife to write about a plant -- the lovely linden. Linden trees are blossoming right now. They are covered with little yellow-white flowers like tiny bells, each releasing perfume that smells like limes and honey. It smells so good that it stops me in my tracks. I've been standing under linden trees all week long, just inhaling the aroma. Mmmmmm.

Lindens are sometimes called bee trees because they are so attractive to bees (not just to me). The linden's honey is unique: it's woody and fresh and delicious. It is believed to help aid sleep and many people take it before bed. Combine that with a bath with dried linden blossoms and you are set for the night.

There are about 30 kinds of linden trees that grow across the northern hemisphere in Asia, Europe, and North America. Everywhere lindens grow they have been woven into the cultural mythology. The flowers are used medicinally and even the ancient Greeks praised them. The tree was associated with the Germanic goddess of truth and love, Freya. Some people still think one cannot tell a lie while standing in the shade of a linden. Lovers used to meet below them to swear faithfulness. I hear that a modern Wiccan might make a staff out of linden because of its powers of attraction and creation. All that and it smells fabulous.

Here is a poem by D. H. Lawrence that seems to fit a week that has been dominated by thunder storms and linden trees. The lime-tree he mentions is another name for linden. The last word is the place in Germany where the poem was written.


Trees in the Garden by D. H. Lawrence

Ah in the thunder air
how still the trees are!

And the lime-tree, lovely and tall, every leaf silent
hardly looses even a last breath of perfume.

And the ghostly, creamy coloured little tree of leaves
white, ivory white among the rambling greens
how evanescent, variegated elder, she hesitates on the green
grass
as if, in another moment, she would disappear
with all her grace of foam!

And the larch that is only a column, it goes up too tall to see:
and the balsam-pines that are blue with the grey-blue blueness of
things from the sea,
and the young copper beech, its leaves red-rosy at the ends
how still they are together, they stand so still
in the thunder air, all strangers to one another
as the green grass glows upwards, strangers in the silent garden 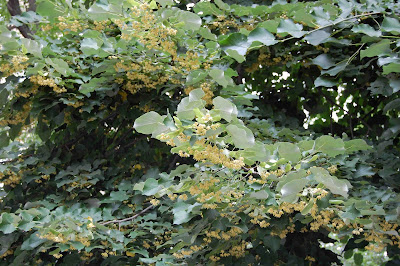 Posted by Julie Feinstein at 6:40 PM