The Hackensack River flows through the marshy New Jersey Meadowlands where the Jets and Giants play in MetLife Stadium. It passes the spot where the American Dream Mall has been slowly rising for over a decade (they say it will have an indoor ski slope). Highways and train tracks cross the Hackensack -- the NJ turnpike, Route 3, Route 46, Interstate 80, the Pulaski Skyway, PATH trains, NJ Transit trains, and AMTRAK. The river has seen development come and go. Structures crumble on its banks, giant tanks of who-knows-what dot the shores, and there is an abundant legacy of old bridges reminiscent of Jules Verne machines. 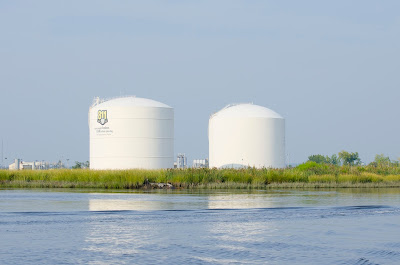 The Hackensack River was severely polluted for a very long time and the surrounding marshes were dumping grounds. There are still health advisories against eating fish caught there. But there are fish -- and hopefully will be more along with other returning wildlife. The area is recovering from its industrial past through a combination of enforcement of the Clean Water Act, declining manufacturing, and the efforts of conservation groups.

Groups like the New Jersey Meadowlands Commission, now merged into the New Jersey Sports and Exposition Authority or NJSEA; they've been working to restore and protect the Meadowlands environment since they were established in 1969. The place is finally getting some respect. You can go for a pontoon ride on the Hackensack with the NJSEA for a contribution of $15.00, and they will tell you all about it.
The boats have comfortable couch-like seats. A guide points out wildlife and historical highlights along the way. And they're friendly -- one of our two boat convoy went back to shore to pick up some late arrivals. We went up river and passed double-crested cormorants on pilings, then down past the sports complex and future great mall. Along the way we spotted great egrets, great blue herons, snowy egrets, mallard ducks, herring gulls, great black-backed gulls, and ring-billed gulls. We saw an osprey sitting on a transmission tower and an empty red-tailed hawk's nest in which a brood of chicks had been raised earlier this year.
Even if we had not seen any wildlife, the trip would have been worth it for the unique view of industrial northern New Jersey and the interesting old bridges. There were swing bridges and vertical lift bridges -- some with massive counterweights and others with giant wheels to coil cables while hauling or swinging their midsections out of the way to let boats pass. The active bridges each have a small cabin in which a worker waits at all hours to let boats pass. They waved at us. Looking up, you can see but not hear trucks far overhead on highways that curve with unexpected grace into the distance. As we went under one of the rail bridges, a train thundered over our heads.

Posted by Julie Feinstein at 4:44 PM