Winter Robin is Back! 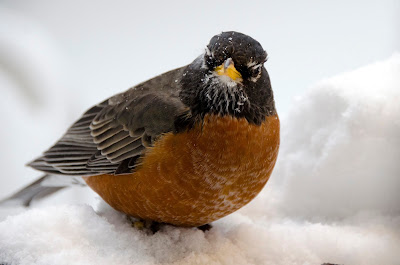 On Friday afternoon, before the big snowstorm started, a robin showed up at my window. When I opened it to throw a few raisins on the porch for him, he swiftly flew to the work surface on the side of the barbecue grill that's right next to the window.

That's where I fed a winter robin last year and the year before. (I can reach out the window and sweep the snow away to make a landing place. That's important when it's snowing a few inches an hour.) This bird already knew the ropes and did not hesitate to land there, even though it's as close as it looks, about two feet from me. I think it's the same bird I've seen on snowy days in past years -- click here to see him posing for a snow photo in a previous blog. I haven't seen a robin on my porch during 2015's entire warm December. I'm glad he remembered he can always get a meal here when the pickings are slim elsewhere.

He came back several times during Saturday's storm, always with his feathers puffed up for warmth, and sometimes standing on one foot. He was waiting at the window for breakfast when I woke up this morning.

Posted by Julie Feinstein at 12:38 PM