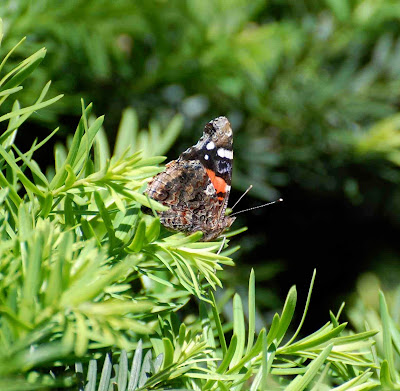 
They are breeding now. The territorial males defend patches of ground, preferably on sunny ridge tops, patrolling back and forth in rapid erratic flight. When a female passes through the territory, the male rushes up and starts courting.
Encroaching males get chased. Passing insects, pets, and people, get investigated and sometimes they get chased, too. A Red Admiral may fly at you and bat his wings threateningly -- even though you may not notice.
Red Admirals often land on people. It’s a good opportunity to look at their famous “brush feet.” They seem to have just four legs because their front legs – their brush feet -- are tiny and held folded up close to the body. The brush feet are covered with tiny hairs that can sense plant chemicals; females use them to evaluate the suitability of leaves for their eggs. Since the caterpillars will live where she puts the eggs, it is quite an important decision. She usually selects a tasty nettle plant.
Red Admirals are common in summer from Guatemala through northern Canada, from coast to coast. They can’t survive very cold winters, so the northern parts of North America are re-colonized from southern populations every year. 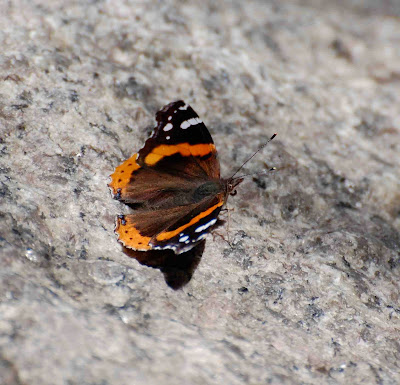 The Red Admiral butterfly, Vanessa atalanta, has a wingspan of about two to three inches. The upper fore wing is black with a bold red stripe across the middle and white spots near the tip. There is a red band on the rear edge of each hind wing.
There is more information about common butterflies in my book, A Field Guide to Urban Wildlife of North America, which will be published by Stackpole Books in spring 2011.

Posted by Julie Feinstein at 6:06 PM