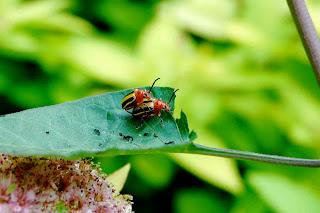 A pair of three lined potato beetles copulate on a leaf.

This pair of brightly colored beetles lives in a flower patch on a traffic island by the entrance to the Brooklyn-Queens Expressway under the Brooklyn Bridge on the Brooklyn side. They are three lined potato beetles, Lema trilinea, named for three black lines on their backs and an appetite for potato plants. 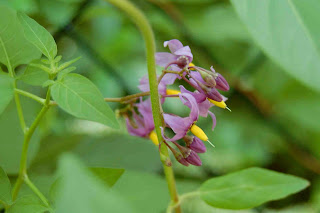 Bittersweet nightshade is an introduced species that is now widespread in North America.
Like many members of the potato family, bittersweet nightshade makes toxic chemicals in its leaves that deter herbivores. But three lined potato beetles are not deterred; they are actually famous for recycling the plant’s chemicals.
After eating nightshade leaves, three lined potato beetle larvae produce toxic feces that they let pile up on their backs. They carry it around, presenting a messy, distasteful, and toxic deterrent to would-be predators. Enough insects use the feces-on-the-back strategy that there is a technical name for the waste-based defense -- it's called a “fecal shield.” 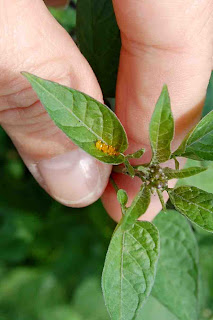 If you find adult three lined potato beetles on a plant, look around and you will probably find leaves with patches of tiny yellow eggs and others with muddy green larvae munching away at the leaves.
If I were you, I would not touch the larvae.
Ewwww...

Posted by Julie Feinstein at 6:01 PM