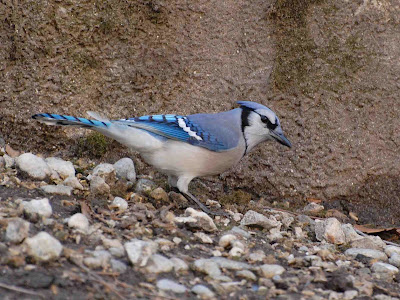 A blue jay, Cyanocitta cristata, occasionally comes to my backdoor in Brooklyn for a snack of peanuts.

Blue jays are so common that we sometimes fail to notice how flashy they are. They are from 9 to 12 inches long, boldly patterned in blues, black, gray, and white, and have a sporty crest that is held flat when the bird is calm and extended when the bird is excited. Their common call is a loud attention-getting jaay jaay.

They’re not just beautiful – they’re smart. A scientist working with blue jays reported watching a caged bird make a tool by ripping off and rolling up strips of paper from its cage floor; it used the tool to reach seeds that had fallen outside the cage and pull them back until they were close enough to eat. Other caged blue jays in the laboratory picked up the trick by observational learning and soon the entire colony was doing it.

Their intelligence may have developed along with their complicated food caching system and the need to remember the locations of buried nuts. Blue jays are scatter hoarders – like squirrels, they bury surplus nuts, mainly beechnuts and acorns, one at a time, and return to consume them later. The strategy of scattering the food in many hiding places minimizes loss if others find the stash.

Lucky for humans and lots of other animals, blue jays bury many more nuts than they eventually return to. Some of the buried nuts germinate and sprout into new oak and beech trees. Of the many American animals and birds that eat acorns and beechnuts, the blue jay is the most likely to unintentionally plant new trees. Blue jays take nuts relatively far away, often more than a few hundred yards from the parent tree; they push them into the soil and they cover them. They bury a lot of nuts, and they take nuts to recently burned places and into open grassland, thus introducing trees to new areas.

Scientists think that blue jays planted oak and beech trees throughout eastern North America at the end of the last Ice Age in the wake of the retreating glaciers and helped regenerate forests on the newly exposed treeless lands.

Today blue jays are still great dispersers of seeds from increasingly isolated fragments of woodlands. Their role is so crucial to sustaining oak woods that they are considered a keystone species -- that is, one with an unusually critical ecosystem function, without which the system would be in danger of collapsing. All this and friendly to humans too!

The next time you see one -- give it an extra peanut. It’s not only beautiful. It’s a very hardworking bird!


There is more information about blue jays in my book, A Field Guide to Urban Wildlife of North America, which will be published by Stackpole Books in spring 2011.

Posted by Julie Feinstein at 7:17 PM