I visited the Edwin B. Forsythe National Wildlife Refuge in Oceanville, New Jersey, this weekend. 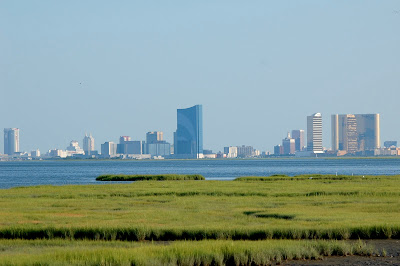 Atlantic City looms across the bay. But cocktails and casinos seem a thousand miles away. The sounds of the Jersey shore on the refuge are the cries of gulls and hawks, the sudden clattering duets of clapper rails, and the rustling of marsh grass.

On this trip I saw something I have never seen before -- black skimmers lying flat on the beach like seals. Normally I see these flashy birds flying inches above the water surface "skimming" the water with their oversized lower mandibles while flying in tight formations. More often I see them sitting on the beach showing off their stunning profiles like in the picture below.

Today many of the birds in the colony were lying prone and resting their big beaks in the sand, like in the next picture. It was about 100 degrees in the marsh. There is little shade. Birds of all kinds were cooling by gulular fluttering -- the avian version of panting.
Perhaps the real surprise was that all of the skimmers weren't lying down; if there had been a wave-lapped sand beach on my side of the channel I would have considered it too.
Posted by Julie Feinstein at 5:51 PM