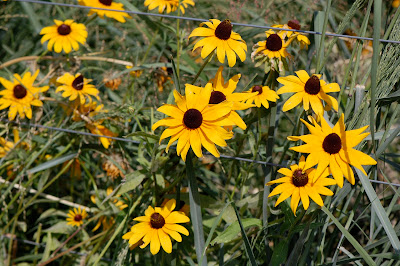 I followed a butterfly into a patch of black-eyed susans this morning. Then I spent the next hour finding interesting things there. Here are pictures of everything that sat still long enough to be photographed.

The question mark butterfly gets its common name from a mark on its wing (click on the photo to enlarge it) -- a silver mark broken into an arc and a dot. Looks like a question mark, doesn't it?

Question marks are part of a larger group known as anglewing butterflies,  which all live in the northern hemisphere, have jagged looking wings, and spend the winter hibernating in shelters as adults. Their camouflaging colors help to conceal them when they settle in cracks and crevices for winter. Although they are not big nectar eaters (usually preferring overripe fruit, tree sap, animal feces, and carrion) they clearly sometime sip black-eyed susan nectar -- perhaps to clear the palate.

When you are checking the wings of brown butterflies for question marks, be prepared to find the question mark's close relative, the comma. Comma butterflies look similar except their silver wing mark is a one-piece comma-shaped arc.