A light comes on near my porch door at night. I think it attracted these uniquely shaped moths; I have found them resting on the outside of the door three times this June. They are plume moths!


Resting plume moths hold their thin wings rolled up and held out to the sides of their slender bodies. They look like a letter "T" with long fragile spiked legs. Their opened wings are fringed and feathery, and divided into lobes that are reminiscent of plumes -- hence the moth's common name. The plumes are not great for flying but the moth's resting appearance is probably good camouflage; it looks more like a twig than a moth.

Adult plume moths feed on flower nectar. Their larvae eat leaves, roots, or stems, depending on species. There are over 150 kinds in the continental United States and over 1000 kinds worldwide. All of them are in the family Pterophoridae. The photographs are of two different individuals. Both are about an inch long with wings about an inch across.

Moth sightings remind me of a poem by Mary Oliver called The Moths. Here are a few lines:


The wings of the moths catch the sunlight
and burn so brightly.
At night, sometimes,
they slip between the pink lobes
of the moccasin flowers and lie there till dawn,
motionless
in those dark halls of honey. 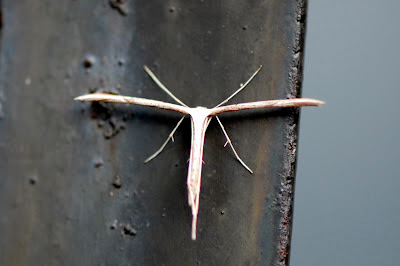